The Development Race Day Series visited Ethembeni School in KwaZulu-Natal on Wednesday, February 11 to donate five bicycles and two trailer-cycles to expose the children to the world of cycling. 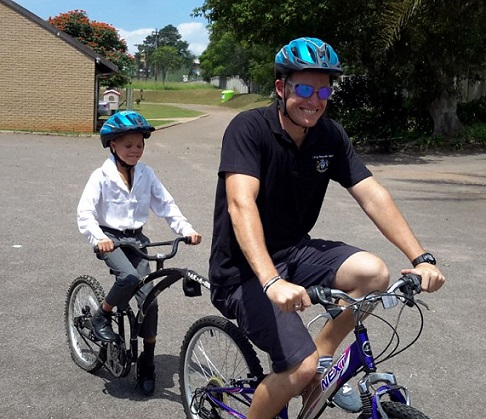 Sphesihle Khumalo is visually impaired and will never be able to ride a bicycle without assistance. With the help of the trailer-cycles he can now experience the beauty of cycling every week. Photo: supplied

The Ethembeni School has been catering for physically disabled and visually impaired children from all over the province for 30 years.

Giba Gorge Mountain Bike Park’s Adele Burger and Senzo Gumede, Giba Gals’ Brenda Harding and Development Officer for KZN Cycling’s Tyrone Johns said it was an honour to be able to give back to a community that battles every day.

The bikes were off loaded, set up, and a handful of children were called up at random to experience the feeling of being on a bicycle for the first time.

The donation has afforded the learners at Ethembeni with many hours of cycling pleasure.

For further information about the Development Series Race Day contact Tyrone Johns on 083 606 6086.