The serious racing got underway on stage one of the Cape Pioneer Trek mountain bike race as Matthys Beukes and Gert Heyns notched up their first stage win on the slopes of the Outeniqua Mountains near George on Monday. 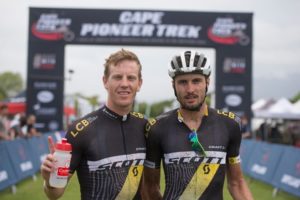 Beukes and Heyns clocked a time of 4:22:02 on the 110km stage, followed by Italian brothers Roberto and Emanuele Crisi of Celeste Kento Avvenia just under a minute later.

Team Jeep’s Dylan Rebello and Thinus Redelinghuys rounded out the podium more than two-and-a-half minutes back.

The teams also occupy the same positions on the general classification.

Southern Cape rider Beukes said the stage, which included 2 300m of climbing and a 15km technical loop through the town of George, had been much tougher than he and Heyns had anticipated.

“We had been out front for ages pushing the pace but we found that last 15km really hard.”

The two Scott Factory Racing LCB teams separated themselves from the chasers early in the race but were eventually reeled in when the race hit the open roads.

“When we hit the first of the big climbs, Gert and I put in a big effort and got a gap on the rest. That was about 80km from the finish,” said Beukes.

“We then decided to go hard for the stage win and made the pace difficult for the others. They surprised us though and brought the gap back down to about 20 seconds at one point.”

Beukes said they had opted against sitting up and letting their pursuers catch them, so they kept the tempo up and opened up the gap even further near the end.

“We made it hard for ourselves, but we have the lead now and will do our best to hold onto that.”

In the women’s race, Britain’s Catherine Williamson and former marathon world champion Esther Suss claimed the stage win and the overall lead in 5:23:51.

The pair were more than eight minutes faster than runners-up Jennie Stenerhag and Robyn de Groot of Team Ascendis, with Marleen Lourens and Desiree Loubser in third.

“We had a really good ride today. There was a lot of climbing and that suits me, while Catherine is strong on the flats,” said Swiss rider Suss.

“We have quite a good lead, but anything can happen and we will do our best to defend it now.”

The second stage covers 86km from George to Oudtshoorn and includes the scenic ascent of Montagu Pass.