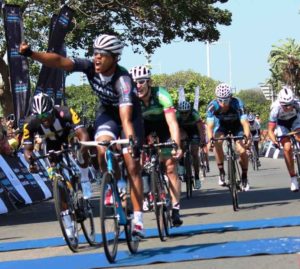 Hoffman executed a textbook win from a bunch sprint in the last 150 metres to take the win, his third consecutive one, in 2:24:55.

Clint Hendricks from the MTN-Qhubeka feeder team and Europcar’s Willie Smit followed him a split-second later for second and third respectively.

In his first outing as a sub-veteran, 30-year-old Hoffman praised his younger Abantu teammates for neutralising any threats and getting him into the perfect position at the finish of the 106km race between Pietermaritzburg and Durban.

“It all came together perfectly,” said an elated Hoffman, who was given the lead-out by Morné van Niekerk, HB Kruger and Reynard Butler.

When asked about rewriting the record books, Hoffman said he was not one to follow statistics.

“As a professional athlete it becomes my responsibility to ensure that I am first to cross the line. If you focus on records and stats you are inviting more pressure you don’t need.”

With the continued existence of Team Abantu in doubt for next season, Hoffman said his future was unclear at this stage.

“It will be a big loss to the cycling community as this team led by Dean Edwards has contributed significantly to the development of young riders.

“I’m not sure what lies ahead, there is always hope, but in the end it’s money that talks.”