Prologue winners Philip Buys and Arno du Toit took one back on stage two of the Cape Pioneer Trek mountain bike race between George and Oudtshoorn on Tuesday. 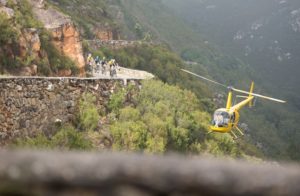 The Scott Factory Racing LCB duo rode away from their rivals in the closing 10km stretch to win the 86km stage in 3:18:22.

Buys and Du Toit’s stage victory was not however enough to unseat teammates and overall leaders Matthys Beukes and Gert Heyns.

Beukes and Heyns looked set to dominate yet another stage when they put the hammer down up Montagu Pass. With the lead bunch splintering in their wake on the winding 7.5km climb, the racing came down to a selection of just five teams.

They applied more pressure to go clear with a two-minute lead over the two Scott Factory Racing LCB teams, the Italian Crisi brothers, Rood and Gerben and the Jeep team of Dylan Rebello and Thinus Redlinghuys.

With 25km to go, a rear-wheel puncture saw Kleinhans and Wolhuter lose valuable time and their lead.

“Going through the technical sections of Chandelier, we could see the Italian and Dutch guys were struggling a bit as they’re on hardtail frames,” said Du Toit.

“We decided not to let them recover and as we came out onto the smoother roads we attacked. Phil was strong and did most of the pacing.
“After losing time yesterday, it was good to pull some back today.”

On Wednesday, the 94km third stage climbs over 1 950m towards De Rust. It includes the rugged and technical Kammanassie Reserve section.