Frenchman Axel Crochard led a dominant display by the Lights by Linea team to take the win in the 96km Bonnievale Bonanza in the Western Cape on Saturday. 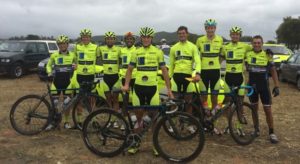 The men in yellow time-trialed to the finish to claim the first six positions in the road race, which forms part of Pedal Power Association’s summer league fixtures.

Lights by Linea applied the pressure from the start as they had the numerical advantage on the day but the Peugeot-Deli1, Aurecon and Alpha Bodyworx teams would not go down without a fight.

Working with the LEADout Academy youngsters, Lights by Linea were able to sustain their attacks throughout the race, with the academy’s Nicol Carstens and Crochard eventually launching the definitive move of the day.

Four of their LBL teammates then crossed over to them to lead the charge into the finish and complete a clean sweep of the top six.