Days of much-needed rain on the KwaZulu-Natal north coast left the trails around Sugar Rush Adventure Centre awash with mud for the Bestmed Ballito Expedition, presented by ASG, on Saturday. 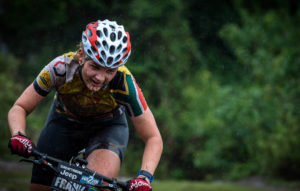 17-year-old Frankie du Toit enjoying the wet and muddy trails on her way to winning the women’s race at the Bestmed Ballito Expedition on Saturday. Photo: Em Gatland

But the swampy conditions were not enough to deter those hardy mountain bikers who took on the 50km feature race, which was won by 19-year-old Matt Wilkinson in a time of 2:13:58.

Wilkinson had to play catch-up from the gun after missing the A-batch start.

“I had to watch the first batch leave without me. I quickly got my gear ready and was off when the third batch left the line,” he said.

“From the start I went flat out, trying to match the pace of the guys from the first batch. For the first hour it went really well, but then the rain started coming down and I had to slow down a bit.”

The KZN local said the muddy and slick single-track sections meant he had to “cope without too much braking”, opting to slow down instead of risking a slip and possible injury.

“I managed to stay on my wheels, which I guess is the key to finishing any mountain biking event,” he laughed.

His win followed some controversy as Alan Hatherly, who started with the first batch of riders, crossed the line first. Wilkinson was however awarded the win as he set a quicker time after starting in the third batch.

Wilkinson, who placed ninth in both the sani2c and Hill2Hill mountain bike races earlier this year, said the Ballito Expedition was his last “leg test” for the year.

Junior national marathon champion Frankie du Toit was the first woman home, adding the Ballito title to her long list of accolades in a time of 2:37:52.

“The ladies’ field thinned quite a bit. Because of the conditions I think many decided to rather do the shorter route, but I still gave my best and went hard right from the gun,” said Du Toit.

The 17-year-old agreed with Wilkinson that conditions made the track very slick, and said they were lucky that the route had little climbing to complicate matters further.

“The route was amazing, especially the single-track sections. I actually had a lot of fun sliding around in the mud and it was a welcome change from the usual dirt tracks we ride.”

In the 25km race, Michael Pullock was the men’s winner, while Chloe Bateson claimed the women’s honours.