Gawie Combrinck and Nico Bell bounced back to win the fifth stage of the Old Mutual joBerg2c at Nottingham Road in KwaZulu-Natal today. 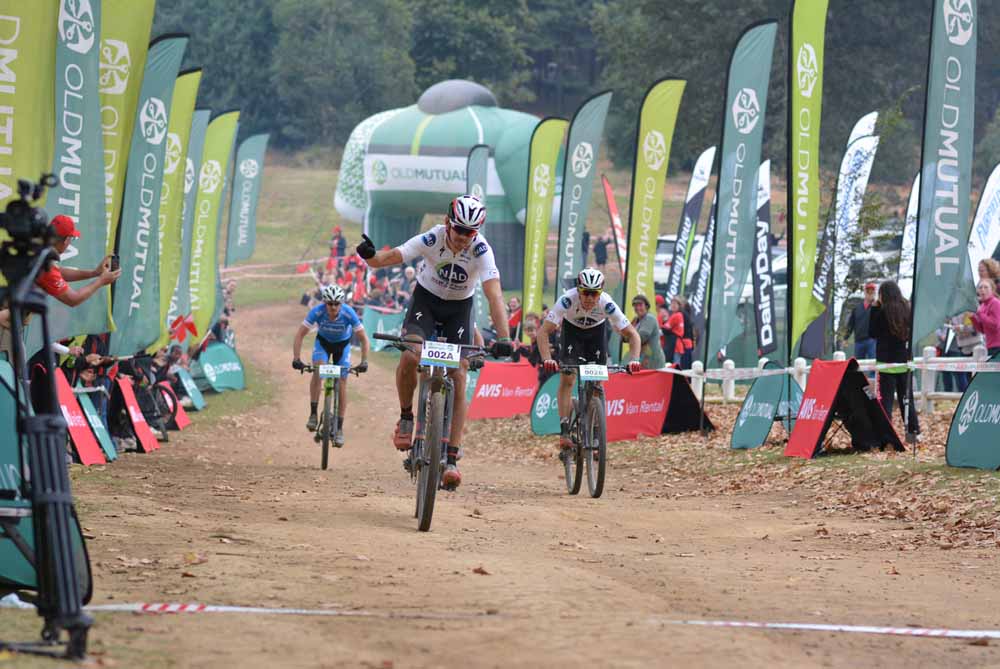 The NAD Pro pair, who lost time yesterday, won the 122km stage between Emseni, outside Winterton, and Nottingham Road in 3:54:34.

They were followed by Telkom’s Johann Rabie and HB Kruger in 3:54:35, with Thule-Pyga-TIB’s Andrew Hill and Tyronne White completing the podium in 3:58:42.

“Today was actually quite relaxed,” said the 30-year-old Combrinck, who lives in Nelspruit. “Nobody really wanted to take the initiative early on with the headwind.

“We attacked at Giant’s Castle leading up to the second waterpoint but couldn’t get rid of the Telkom guys. From there we set the pace for much of the day and in the end it came down to a sprint.

“It was a case of entering the single-track leading into the finish first so that we could at least get a stage win out of the day.”

Bell, who is also from Nelspruit, said it was quite tough over the last 40km where they tried to get away.

“They basically just had to follow our wheels and it came down to who entered the single-track first.”

Combrinck said tomorrow’s new stage six, which will take riders over 98km to Glencairn Farm on the Sani Pass road, promises to be quite a tough one and they would try to attack if and when they could.

Having lost the overall lead yesterday after flatting, Johan Labuschagne and Catherine Williamson bounced back to win the Lanham-Love Attorneys mixed section and move back to the top of the general classification.

The Bicycle Company-Bestmed pair completed the day in 4:04:15, followed by Dorma-USN-Purefit’s Darren Lill and Candice Neethling in 4:11:24 and Valencia Lanham-Love’s Grant Usher and Amy McDougall in 4:21:22.

“Going into that single-track up to Hangman’s Tree it is always important to be placed well because that is usually were the field splits,” said Labuschange.

“Although we were quite well positioned, Candice and Darren were slightly ahead of us and got away. I think that is where Grant (Usher) fell and broke his seat.”

He said they caught up to Lill and Neethling at waterpoint one and they were all together on the district road leading up to waterpoint two.

“On the dirt road it was attack after attack. Darren and Candice were extremely strong – especially Darren, he was a beast.

“We dropped off a few times but managed to come back each time.

“After waterpoint two we were still together but then they disappeared and I can only assume they had a puncture or Candice might have had a difficult moment.”

The nine-day Old Mutual joBerg2c ends in Scottburgh on Saturday after 900km of racing.