2015 champion Chris Wolhuter will have a new co-rider with him as he defends his title at the Liberty Winelands MTB Encounter this weekend. 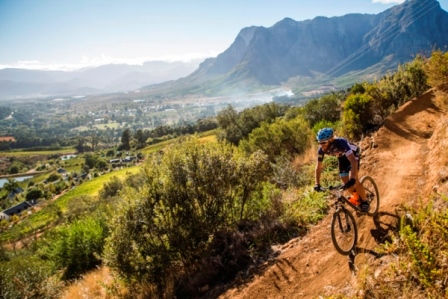 Wolhuter, 27, who was the victor of last year’s event, will be teaming up with Craig Boyes in the three-day race that starts at Coetzenburg this Friday.

Wolhuter, who was behind the launch of the Imbuko-Freewheel Cycology professional team this year, first rode with Boyes at the 2016 Cape Epic.

“We have since formed a good bond and will be doing some more races together,” said the Capetonian, who grew up in Pietermaritzburg.

He is aiming for success. “Naturally, we will be riding for the win. We had a good Epic and the focus since then has been on recovery and sharpening up for Winelands.”

Wolhuter said they had come up with a relatively conservative race plan.

“We will focus on one stage at a time, aiming to make gains where we can, while keeping in mind that it is a lengthy three-day event, so we must save energy where we can too.”

After scoring several wins this year already, Wolhuter said he was happy with their shape.

“At the GR300, Craig won the first and second stages, but got a puncture on the final day to finish third in the general classification,” said Wolhuter, who took second.

The two finished in a very respectable fourth place in the Cape Epic. Last weekend Wolhuter showed that he was peaking strategically when he took third in the 99er MTB Challenge.

Following the Winelands race, Wolhuter and Boyes will be taking part in a series of multistage events, including the Mauritius Tour Beachcomber and the PwC Great Zuurberg Trek, where Wolhuter just missed the title last year, coming in second to Andrew Hill.

“These are all special events in their own right and I am looking forward to each,” said Wolhuter.

Wolhuter said he was also looking forward to the Winelands race as the route followed breathtaking trails through the Cape Winelands. He listed the Skyfall and Welvanpas trails as his favourite sections.

Riders face 54km with a total ascent of 1 500m between Coetzenburg and Le Franschhoek Hotel outside Franschhoek on day one.