Chris Wolhuter of Imbuko-Freewheel Cycology had to deal with a curveball or two on stage one of the PwC Great Zuurberg Trek. Here is how he dealt with it. 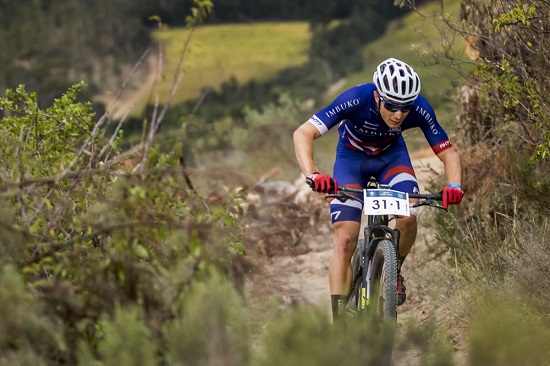 The first stage of the PwC Great Zuurberg Trek is under the belt, but not without a few curve balls!

Racing at the pointy end got underway up the first climb shortly after the gun and just ourselves and TIB-Contego entered the Seven Dwarves Drop together.

Adriaan (Louw) was thrown the first curve ball when he lost a bottle early on and, with still 60km to go, he was forced to collect it.

The single-track into the valley was in great nick and the work put into it has ensured that this section improves every year.

The first real test of the race is Monty’s Python and, although short, it is a steep and rocky climb. Myself and Andrew started the climb together expecting the others to ride back on.

Unfortunately, it was my team-mate, Dylan Rebello, who had suffered the next curve ball. Through the longer grass his pedal had clipped a rock, sending him over the handlebars.

Although a bit dazed and having broken his shifter lever clean off, he was fine. The shifter worked with difficulty, but got him through the stage.

Adriaan showed good sportsmanship in stopping to check whether he was okay.

After we had re-joined each other, a long chase ensued to catch up with the leaders.

However, unbeknown to us at the time, Andrew (Hill) and Adriaan had followed the lead motorbike off course and, to our surprise, came up behind us again as we entered the last 15km of the stage.

Each of our teams had been thrown a curve ball but we started the ascent of Zuurberg Pass – which led to the finish – together. Contego-TIB put in a few accelerations to try and shake us off, but we hung deep.

The pass is deceptively long and playing it smart prove to be key. Dylan took over the pace-making duties with 3km to go and, as we entered the last of the steeper pitches, he managed to shake Andrew off his wheel.

I waited for a moment to make sure the gap was there and then jumped across.

It was less than 2km to go, but it felt like an eternity. I hung onto Dylan’s rear wheel and we managed to take out the first stage with a handful of seconds.

It was a great win for us and an even better way to open our account here at the Great Zuurberg Trek. Kargo rounded out the podium after they too had a day with troubles.

The queen stage awaits tomorrow. The route in itself means that we will be in for a tough day and I’m sure the TIB-Contego gents will come out with guns blazing!