Riders can gear themselves up for a unique experience when the inaugural Liberty Waterberg MTB Encounter unveils a series of new trails in Limpopo, near Bela-Bela, from Friday to Sunday. 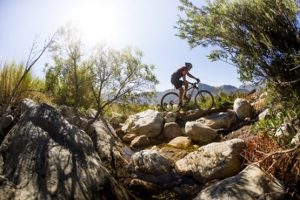 Mountain bikers are ready to take on the second event in the Liberty Encounter Series when the Waterberg MTB Encounter takes place near Bela-Bela. Photo: Ewald Sadie

The three-day race is the second event in the Encounter Series, the country’s first multistage mountain biking series, and follows the highly successful staging of the Winelands MTB Encounter in the Western Cape over the past two years.

In setting up this pioneering event, ASG Events, under route director Mel Meyer, have been “selling” the idea to the landowners over the past few months to ensure a memorable experience.

“Because it’s a first for the Waterberg in terms of mountain biking races, it is also a first for the landowners,” said Meyer. “They are game farmers and normally don’t provide access to the public.

“One of the first things we had to get right was to gain access to the land to create the routes, because most of it will be going through the game farms.

“We really had a lot of buy-in from the farmers and they are assisting us so much. Without that we would not have been able to put this event together.”

Meyer was in no doubt the riders would experience more than just another mountain bike race.

“The big thing about the route is that you are not just going to ride inside a game farm. You will go through a number of them and past some of the most exclusive game-breeding projects in the country.”

With rolling grasslands surrounding the 14 500 square kilometre mountain range, which rises to 1 400m in some places, Meyer said the riders would enjoy the routes, but warned there would be a few challenges.

“Day one is not that long but it’s going to be hard work. You will go through about 19 farms and climb just over 1 000m on a tough track because the Waterberg has lots of rocks and stones.

“We are cleaning up as much as we can, but you will need some skill and you will appreciate your dual suspension.”

Meyer said the second stage featured 29km of single-track in the Welgedacht Nature Reserve while the final stage had only 700m of climbing.

“So it will basically be downhill back to the bush lodge of Sondela.”

The organisers have travelled a long road in setting up the event, but Meyer had no doubt of its long-term potential.

“Creating the route has been hard work, but we are definitely looking at long-term success. Once the landowners see what we are doing, they will start building their own tracks.

“And that’s how we will get this ‘machine’ going.”