After the previous day’s mishap, Chris Wolhuter of Imbuko-Freewheel Cycology took a more mellow approach into the final stage of the PwC Great Zuurberg Trek. 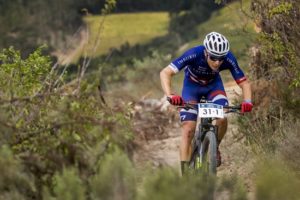 After the drama and toughness of the second stage at the PWC Great Zuurberg Trek, Dylan and I were looking forward to the shorter final ‘play stage’ to wrap up the race.

It descended back down to the Addo bush and we enjoyed the numerous trails at Hayterdale.

The trails are not smooth nor manicured and can be a bit loose and rocky in places, but they have a very good flow to them and allow one to build up speed and carry it through the turns. This makes them exceptionally fun!

We started off the stage on the attack and looked to see if we could make amends for the previous stage.

A stage win would’ve been a great way to cap off the race as we were well and truly out of the GC fight.

We led from the front after the first steep kicker to open affairs, but, after some steep kickers a short while later in the Addo bush, we realised that our running exploits of the previous day had hurt the legs more than what we had imagined.

Kargo set off on the charge and were also game to add a stage win to their score sheet and, ultimately, they would come away with it.

We again found ourselves in the company of TIB-Contego and, with their buffer in the general classification, we could take a slightly more mellow approach to the final kilometres – even stopping for a quick bite at a water point!

We had to make a quick stop to rectify a minor mechanical, but besides this the day went well.

We ascended Zuurberg Pass for the final time on our own and had time to reflect on what had been a weekend of highs and lows.

We finished third on the stage and it offered some redemption after the previous day’s troubles.

The PwC Great Zuurberg Trek is a really fantastic race and one which I thoroughly enjoyed being back at again.

The organisers are doing so much right, which makes it a real pleasure to be involved.

A new concept was the “walletless weekend”, which meant free booze from the sponsors.

This included coffee, cappuccino and you name it from the coffee bar, where two barristers put in as much effort as the riders to stay ahead of the game.