Mountain biker Andrew Hill, who rides for TIB Insurance-Contego alongside Adriaan Louw, feels like he has become the lead actor in an action movie. “Watch” this until the credits roll. 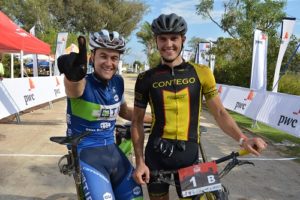 When people ask me what I do for a living, I often get the strangest replies. I can only imagine the picture conjured in their heads as to what professional mountain biking entails.

I always think of those cartoon pictures with the captions “What my wife thinks I do/What my friends think I do” – with the punchline always being something more mundane than reality.

I’m not sure this really fits with mountain biking though. I can say this with great conviction, especially after the last two days of racing at Zuurberg, where the reality is every bit as thrilling as a Mission Impossible movie.

With all the top podium contenders having a “curveball” of sorts chucked their way somewhere along the line, the ups and downs of racing at Zuurberg certainly makes for an action-packed script.

The first stage was eventful from our side as we lost over three minutes after the lead motorbike took us off course (all credit to him though as he did try to find the markers for the next turn after the arrow had been knocked down).

This cost us dearly by the finish line as we burnt a box and a half of matches in trying to limit our losses and catch back up to the then leaders Chris Wolhuter and Dylan Rebello.

Our race report wasn’t the only script that read like an action novel. Chris and Dylan had problems of their own when Dylan hit his pedal on a rock and catapulted hard into the ground.

Fortunately, my team-mate was just behind him and Adriaan stopped to help.

After assisting Dylan and putting his bottles back on his bike, Adriaan set off to catch up with myself and Chris, who was none the wiser as to what had transpired behind him.

The fall slowed them up a little and they were on their way quickly to chase us down in the orange orchards that lay further down the route.

The third placed team also had their fair share of drama on day one. Jurgens Uys and local boy Marco Joubert were struck with stomach issues and this slowed their progress significantly and they finished a good eight minutes down.

As I mentioned yesterday, stage two was the queen stage and it turned out to be every bit as thrilling as the previous one.

Adriaan and I were the early victims as I felt my back tyre going down only 14 kilometres in.

This forced us off the bike and a CO2 canister and plug later we set off to make up the minute or so lost. Our pacing worked and within four kilometres we had made up the lost time on the two leading teams.

We kept the tempo rolling and managed to leave them behind after which we were able to build a lead of around eight minutes. We hurtled towards the finish not knowing what was unveiling behind us.

The plot was unravelling itself at an alarming rate as Chris cracked his rim and then lost his tyre.

With each minute on the side of the trail he and Dylan were being distanced from the podium and becoming more and more frantic about how to fix the problem – eventually having to run before receiving a new wheel.

This left the door open for the now tummy bug free Marco and Jurgens to move into second.

Our action movie – The Great Zuurberg Trek 2 – had reached its crescendo with all the suspense and thrills we have come to expect of a proper mountain bike race and, with that, the words “To be continued” rolls across the screen.