After finishing third in the opening day time-trial, defending champion Willie Smit bounced back to take the second stage of the Bestmed Jock Tour in Nelspruit, Mpumalanga, today. 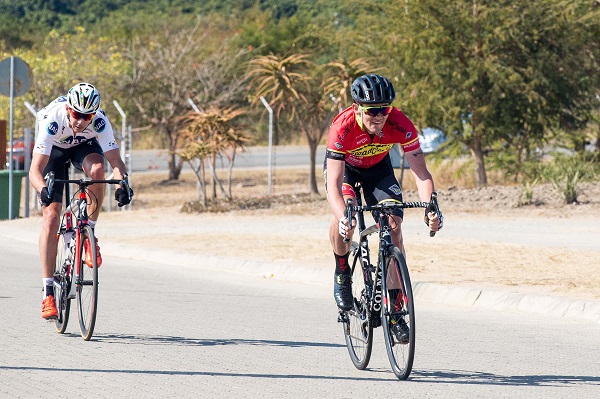 RoadCover’s Willie Smit took the honours in the second stage of the Bestmed Jock Tour in Nelspruit, Mpumalanga, on Saturday. Photo: Memories4U

The 23-year-old Smit, who is from Nelspruit and rides for RoadCover, was followed home by Team NAD’s Nico Bell, who claimed the yellow jersey from JC Nel after the ProTouch’s rider time-trial win on Friday.

Smit was pleased with his efforts after suffering serious injuries when he crashed in the Tour de Bretagne in France in April.

Smit’s team-mate Mornay van Heerden, who set up the winning move when the trio broke away on Long Tom Pass, crossed the line in 3:53:42 to finish third on the day.

Bell leads the overall standings on 4:48:32 and will take a seven-second lead over Smit into the final stage. Van Heerden is third on 4:49:33.

With two tough climbs on the route which goes through White River and Sabie to Nelspruit, Smit said a lot of riders were sitting on as the peleton went up Long Tom Pass.

“So I got Mornay to go really hard for the last two kilometres and the only rider who was able to follow us was Nico.

“The three of us rode away over the top and built a lead of about three minutes,” said Smit.

“We then started attacking Nico, but he had very good legs and it’s hard to ride away from someone when they are just sitting in your slip.

“But in the end we managed to win so it’s better than nothing.”

Besides the lingering effects from his crash in April, Smit said he was also struggling with an upset tummy.

“I have been struggling with it throughout my career, so my form is dependent a lot on how I’m feeling.

“This is my first race in two months and when my nerves get too excited it often leads to stomach issues,” he explained.

He praised his team for their support, saying they “are the foundation for my success”.

“I am pleased with the win today but I did not manage to ride Nico off as I was hoping to in order to collect the yellow jersey as well.”

Smit said he realised another tough stage lay ahead on Sunday.

“If the stage starts easily I may have a chance to gain the seven seconds, but I will save my energy for Hilltop, which is one of the hardest climbs in South Africa.

The third and final stage of the tour, which is presented by Rudy Project, is over 138km and features 3 100m of vertical ascent.