Slovakian world champion Peter Sagan won the 11th stage of the 2016 Tour de France to increase his lead in the green jersey competition in Montpellier today. 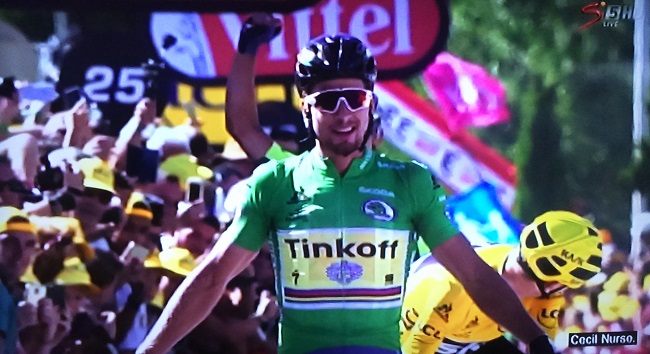 The top three were part of a four-man breakaway group, which also included Froome’s Welsh team-mate Geraint Thomas, that went clear of the main peloton in the crosswinds in the closing kilometres.

“It was something crazy that just happened,” Sagan said after collecting his second stage win of this year’s race.

“I can’t believe it, we went and then Froome and Thomas came with us. I said we were strong and they (the peloton) were never going to catch us and we just pulled very hard and it happened. Unbelievable.

“Everyone was concerned about the wind, but it was only in the last 15km. You knew you had to stay in the front because the bunch would split for sure,” said Sagan.

“To go in a break with the yellow jersey, green jersey and two other guys, you cannot plan that. It just happened. It’s crazy.”

King of the Mountains