Andrew Hill raced to victory in the Scottburgh MTB race on KwaZulu-Natal’s South Coast on Sunday.

After the event’s first ever staging was washed out in 2008, the subsequent eight editions have produced a new men’s winner each time. 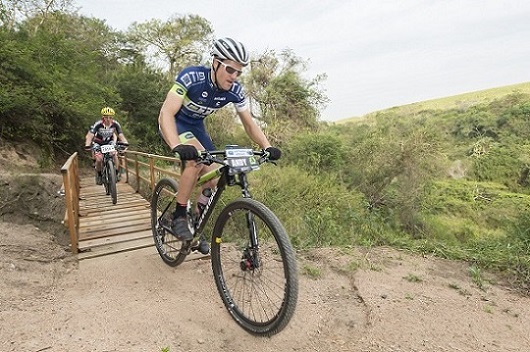 TIB Insurance’s Hill is the most recent to join the club after he overcame the strongest field in the history of the event.

Both the Hillcrest-based rider and his three nearest rivals – Swiss Cycles’ Andrew Johnson, ROAG Racing’s Jedson Tooms and Kargo Pro Cycling Team’s Andrew Warr – were made to work harder than expected after navigational errors by the initial lead quartet erased their early advantage.

“It’s nice to come down to this great South Coast race for the first time and get the win, especially as there was some serious talent this year,” said Hill.

While Hill charged to victory, riders chopped and changed positions behind him, with Hendrik Bester ultimately racing home to claim the runner-up award.

It was a South Coast-dominated women’s podium as the hometown star was followed across the finish line by Umtentweni rider Debrah Thomas, who narrowly edged out Shelley Beach’s Nataschka Mowat.