Rory Mapstone of Team Bestmed-ASG felt well prepared for the Trans Baviaans, but wiping out on a descent was just one of the problems on his way to defending his masters’ title. 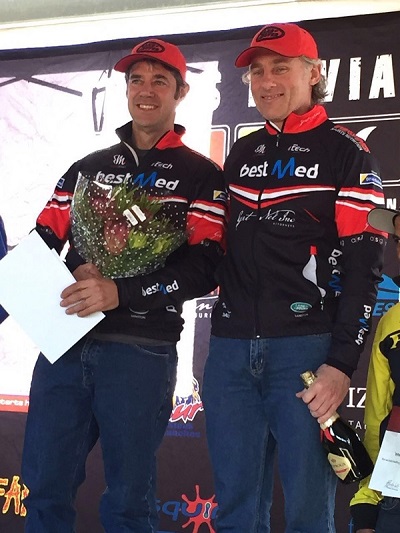 Heading into my second Trans Baviaans, I was confident that I had it all figured out. And, having placed 11th overall last year, we had the privilege of starting with the seeded riders.

It was clear that nobody was going to work too hard in the beginning. This, coupled with the fact that we had a headwind, meant that quite a big bunch stuck together.

The main challenge over this section was to find somewhere smooth to ride as the corrugations were far worse than last year. The pace picked up as we entered the reserve.

There were still enough teams to result in confusion as we pulled into checkpoint two and this is where things started going wrong.

The splash and dash resulted in me almost leaving with someone else’s bike and, in the process, getting separated from my teammate Christo van den Heever.

Realizing that he was already up the road I blasted out of the checkpoint at full pace.

I caught up, but blew my legs in the process and discovered that there is no way of recovering after a big effort like that.

While climbing The MAC, I began to pay the price for my earlier effort. Cramps set in and it became a matter of managing the effort to prevent my legs from locking up.

The advantage of riding near the front end of the race is that you cross Bergplaas in the light. The down side is that you descend faster and if you get it wrong you are going to fall harder – which is exactly what happened to me going down the Big Dipper.

I was on Christo’s wheel going around a sharp bend and the off-camber took us both into a washout. He managed to ride out but I came down hard on my shoulder.

It probably took less than a minute to get going again and then it was time to start inspecting the damage. There were injuries to my elbow and knees but it did not look too serious.

The combination of blood and sweat looked bad but there was nothing that would lead to lasting damage so we soldiered on.

The Neverender proved to be a lot tougher than last year. Each time I raised my effort the cramps set in.

Just before the unmanned checkpoint the Merrell mixed team and PCC caught us. We tried up the pace but this just set the cramps off.

They had obviously ridden the first half of the race more conservatively and were reaping the rewards.

We managed to pass PCC just before checkpoint seven after they had a minor mechanical. They caught us again shortly after and although it was clear we were not going to stick with them until the end it was good to have company for a while.

Our final challenge came as a result of picking up the pace and not paying enough attention to nutrition. Christo’s reserves dropped to a point where we had to stop and refuel.

It is not a very pleasant feeling knowing that you cannot continue riding and that other teams are approaching from behind.

There is a little sting in the tail of this race, a 5km section of single-track along the railway line. Although marked, it is pretty tricky navigating in the dark.

I took the lead on this section, not because we were racing but rather because there were no other volunteers. At that point I just wanted the race to be over.

In the end we finished first in the masters’ category and seventh overall in 9:18:42 – a great result for us!