Rory Mapstone and teammate Christo van den Heever are looking for success beyond the masters’ category in the 230km Trans Baviaans endurance mountain bike race that starts in Willowmore tomorrow.

Mapstone, who won the master’s section last year and placed 11th overall, said he and his new Team Bestmed-ASG partner would be aiming for a top five position overall. 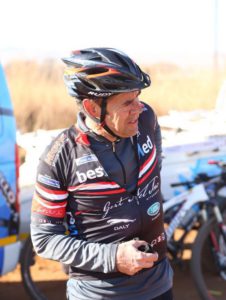 “Trans is all about endurance and pace,” he said.

“Our guys should do the first 100km under three hours, but the race only really starts when they hit Patensie after 150km.”

He said a conservative start would pay dividends later on as the stretch from Patensie to Jeffreys was notoriously tough.

“If you looked after yourself you’ll be fine, but, if not, the last 80km will be extremely hard and strenuous.”

Van Rooyen said the team was well-prepared with numerous five to seven-hour rides under the belt over the winter period.

Their mixed team – consisting of Gert Nel, Stephan Corthing and Sanet Coetzee – will target a podium at the finish in Jeffreys Bay.

They will rely heavily on Nel, who has four Trans Baviaans races under the belt, to lead them to a high finish on the unmarked course.