An unfortunate crash took Team Dimension Data out of contention during the 171km fifth stage of the Vuelta a Espana from Viveiro to Lugo yesterday.

DiData’s riders were looking in good shape with 3km to go when a technical run-in to the finish and a late attack by Phillipe Gilbert (BMC) and Simon Clarke (Cannondale-Drapac) caused some panic. 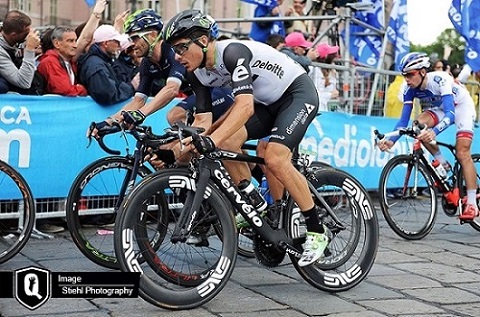 Team Dimension Data’s Kristian Sbaragli had to stop pedalling following an unfortunate crash and lost the chance to get a good result yesterday. Photo: Stiehl Photography

The result was a big crash in the peloton which took many riders out of contention.

The team’s Kristian Sbaragli was able to ride into the top 10 after that crash with just 1km to the finish.

As the road started to open up ahead of the punchy Italian sprinter with 600m to go, a rider rode into the back of Sbaragli which caused another mass pile-up.

Fortunately Sbaragli kept his bike upright by unclipping his foot but obviously he was no longer able to participate in the sprint.

DiData sport director JP Heynderickx said after Tuesday’s break by Nathan Haas and Merhawi Kudus, they went all in for Sbaragli to have a sprint.

“The guys did a great a job and they did what was asked of them. But when somebody rode into the back of him he had to stop pedalling and lost the chance to get a good result today.”

Tyler Farrar and Jaco Venter did a lot of the early lead-out work for the team in a fast and frantic finale.

NEXT ARTICLE | Plenty of variety at Silverstar MTB Challenge