South Africans Philip Buys and Matthys Beukes (Team Pyga Euro Steel) are aiming to become the first all-African team to win the Cape Epic when it kicks off on March 19.

“I think we have matured enough to set the Cape Epic win as our ultimate goal for the next few years. We will be disappointed with anything less than an overall podium and the African jersey,” said Buys. 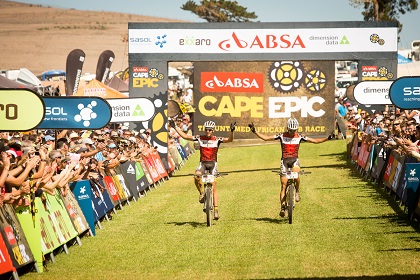 The red jersey goes to the first all-African team to finish the event and has become fiercely contested in recent years.

Their biggest challengers are likely to be Waylon Woolcock and HB Kruger (Team BCX). Last year they took the jersey home at the fourth time of trying.

“The African Jersey is top priority and whatever overall position comes along with that,” said Woolcock.

Buys has three stage wins to his name and Beukes two, and in 2015 they rode together and finished fifth overall – winning the African jersey.

“Stage wins are really nice and exciting but that’s not the goal,” said Beukes.

“We’ll race for an overall but if the opportunity to grab a stage win comes up we’ll definitely take it.”

Also in the field are Nico Bell and Gawie Combrinck (NAD Pro) who will, however, be riding in support of Christoph Sauser and Jaroslav Kulhavy (Investec Songo Specialized) – potential overall winners – and may have to sacrifice their own ambitions to help the team leaders.