“It’s made me think that I haven’t yet seen the peak of what I can do,” he said shortly after arriving back in the country.

“It’s definitely taught me things about myself that I didn’t believe was possible going in to the race.”

The 25-year-old showed consistent form over the five days of the tour to place fifth in the general classification. 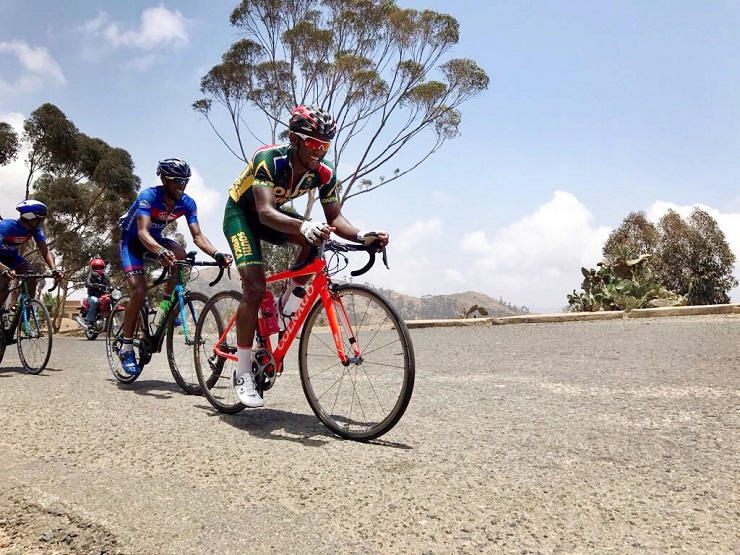 Clint Hendricks took part in the Tour of Eritrea where he had a number of top five results. Photo: Bradley Potgieter

Despite being ill the day before the start, the Cape Town Cycle Tour champion fought courageously to place second on the 124km opening stage behind local star Meron Teshome.

“There was a big climb within the first 15km and I got dropped by the bunch as we reached the top. That’s where I thought ‘Ok, this is me done for the day’.”

But he persevered and was joined by a small group of chasers. Riding with them, they caught the leaders around the halfway mark.

Disaster struck when Hendricks – a renowned sprinter – had a rear wheel puncture 5km from the finish.

“Our manager Peter-Lee (Jefferies) did a good job in getting me back in the race and I caught the bunch with four kilometres to go. From there it was all about the sprint.

“I knew Meron was the favourite after his recent strong performances,” said Hendricks.

“I know him from racing together in the past, so I knew he was the best one to follow in the sprint.”

The South African pulled alongside the African time-trial champion in the sprint, but was unable to draw clear into a tough headwind.

“Mentally this tour has given me a boost in terms of my abilities and how far I can push myself.

“It’s made me think that I haven’t yet seen the peak of what I can do and it’s definitely taught me things about myself that I didn’t believe going in to the race.”

“Going forward, my results in Eritrea will remain in the back of my mind and I’ll be able to look back on what I achieved and use it to motivate myself to do it again.”

He showed glimpses of what was to come when he finished sixth in both the Fenkil Northern Red Sea Challenge and Massawa Circuit event in the lead-up to the tour.

Hendricks will line up at the Tour Durban on Sunday where he said he hoped to continue his good form.