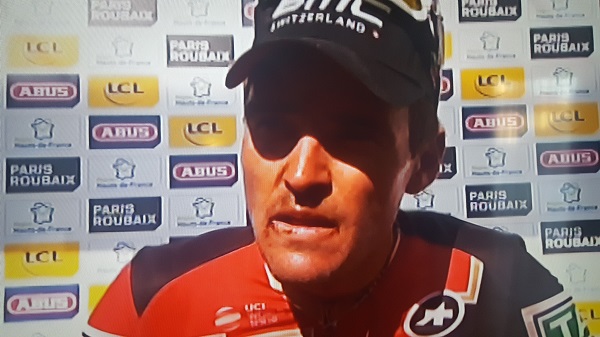 The Belgian, who finished second in last weekend’s Tour of Flanders, got the better of the Czech Republic’s Zdenek Stybar (Quick-Step Floors) and Dutchman Sebastian Langeveld (Drapac-Scott) in a five-man sprint to win the Queen of the Classics in 5:41:07 after 257km of racing from Compiègne outside Paris.

Stybar, who finished runner-up in the past, led the sprint out with 200m to go and seemed to have timed his effort perfectly after initially distancing his rivals by a few bike lengths, but Van Avermaet slowly bridged the gap in the main straight to draw even and pass him just before the line.

Van Avermaet led Stybar and Langeveld onto the velodrome, but a tactical game of cat and mouse saw Jasper Stuyven (Trek-Segafredo) and Giannie Moscon (Sky) catch the trio with half a lap to go. Stuyven got the better of Moscon to finish fourth.

The five riders were part of the final breakaway group of seven riders that formed around 30km from the finish. The other riders were Van Avermaet’s Italian teammate Daniel Oss – in front on his own before being caught by the chasers – and Belgian Jürgen Roelandts (Lotto-Soudal).

“It was maybe the race I would’ve said I was unable to win,” Van Avermaet said after clinching his first monument.

“When I first crossed the finish line I was so tired and I didn’t really know what to expect. I’m so happy that I did it.

“Everything went perfect, but in the end I was afraid of Stybar as he was not working with us. But then the sprint went good; I’m really fast at the end of these long races,” said Van Avermaet, whose only scare came when he crashed just before the five-star-rated Forest of Arenberg.

“I’m really happy that I’ve won my first monument. I’ve had to wait a long time before I could get this spot in a big monument.”

He said his teammates were in the right positions throughout the race and credited them and Oss, who sacrificed himself in the run-in to the finish, for his victory.

“I think every small piece came together and that is why I won today.”

Beglium’s four-time champion Tom Boonen (Quick-Step Floors), who bowed out of professional cycling after the event, rode a strong race but was unable to infiltrate the top 10.

Slovakia’s Peter Sagan (Bora-Hansgrohe) ran out of steam in the closing kilometres after mechanical problems put an end to several impressive attacks.