The top riders jostled for position in the penultimate stage of the 2017 Giro d’Italia, as Thibaut Pinot took the win with an impressive sprint in the last 500m on Stage 20 from Pordenone to Asiago.

For the first time in history, four riders are enclosed in one minute ahead of the final Time Trial.

Movistar’s Nairo Quintana retains the Maglia Rosa, but is just 39 seconds ahead of Bahrain-Merida’s Vincenzo Nibali, while FDJ’s Pinot is now third at 43 seconds. Tom Dumoulin of Team Sunweb is now 53 seconds back in fourth place going into the final stage. 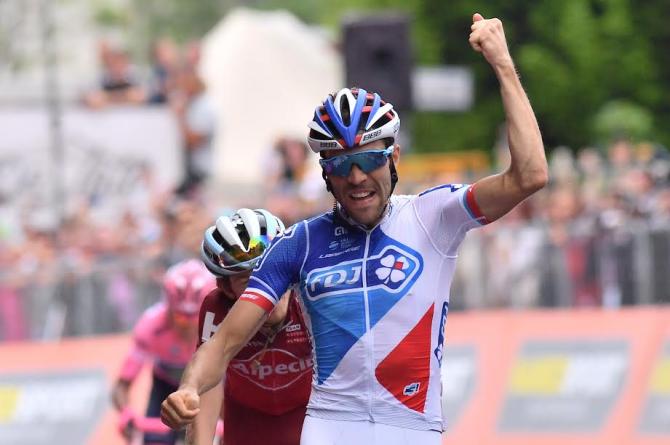 FDJ’s Thibaut Pinot won the took the win with an impressive sprint in the last 500m on Stage 20 of the Giro d’Italia from Pordenone to Asiago. Photo: LaPresse

It will be very different to the first trial, at the start of week two. It is flatter so that should suit the specialists more after two weeks of extremely tough racing.

Pinot spoke briefly before he stepped onto the podium.

“Until 3km to go, I was just trying to make time. I didn’t have the stage win in mind.

“The time gap is not big, the time trial tomorrow is pretty flat and it suits Dumoulin a lot. The most important thing will be to limit the damage.”

Quintana’s team manager Eusebio Unzue thinks that the Dutchman is still the big favourite and isn’t convinced that they have enough time over him to keep the pink jersey until the finish in Milan.

“We tried absolutely everything. We tried to increase the gap and we tried to make it a bigger advantage,” he said.

Dumoulin had a smile on his face after the line.

“Finally the climbs are gone. I was very happy that I had better legs and I had a good day again. I’m forever grateful for the help in the final from Mollema, Jungels and Yates.

“The time gaps tomorrow will not be as big as in the last TT, definitely not, so I will just have to fight for every second and we’ll see how it goes tomorrow.”