The mountainous queen stage of the PwC Great Zuurberg Trek suited Team BCX well as the pair secured their second win of the three day event. Professional cyclist Waylon Woolcock shared his thoughts on the day.

Yesterday we spoke about our tactics for today and we could see there would be a lot of climbing to waterpoint four, after about 50km.

We knew from there if we got a decent gap over whoever was chasing us, if we rode a little bit out of our comfort zone down the descent, then we could hold them off for the next 18km to the finish line.

When we reached that point it was Gert and Arno who were behind us.

HB navigated the descent well, choosing clean lines, and we were going well leading to the fifth water point until we had our little oops. 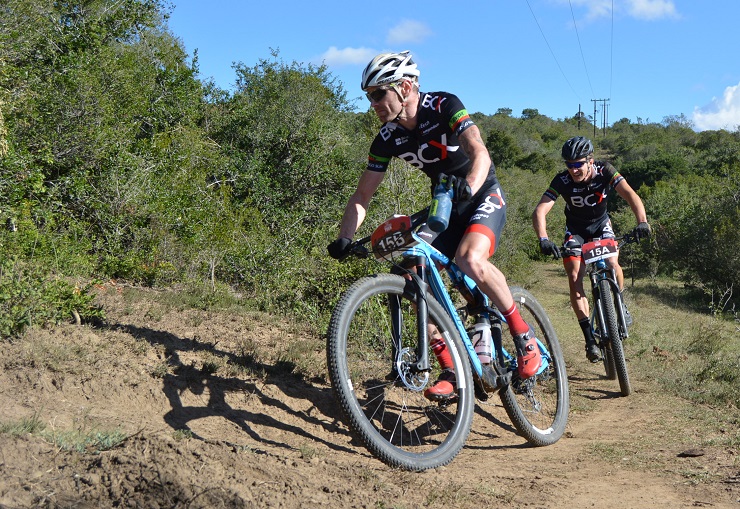 Team BCX secured their second victory of the Great Zuurberg Trek on the queen stage of the event. Photo: Full Stop Communications

We turned in towards the waterpoint and we could hear raasbekkie tuning us and unfortunately I didn’t see a turn we should have taken.

I was met with a good one metre drop but was in the front so I kept my momentum and made the drop but I think HB braked and didn’t have enough speed to clear it so he had a fall.

Luckily there was no damage, perhaps only a bit of wounded pride, and he was back on the bike pretty quickly.

From there it was a bit of a switch back climb and the commentary from the waterpoint told us we were a minute and a half ahead of the other guys.

What suited us was the fact there was still some short, steep climbs and we knew that whenever we ascended we increased our lead.

We had to ride as hard as possible, without blowing, until the end and once we got back to the district roads we then we rode as safely as we could to the finish.

We’re going to need that gap tomorrow. It’s a technical, tricky kind of route that’s only 50km so it’s going to be short and sharp.

I think we’ll see much closer racing tomorrow and with Arno and Gert and the rest of the guys, they know the routes and like the technical riding so we’ll need every advantage we can get.

It would be nice to take a third stage win but the main goal is to protect our overall lead so if we’re second or third it doesn’t really matter as long as we take the title overall.