Tour Durban winner An-Li Kachelhoffer was there to offer her support and encouragement to Bestmed-ASG teammate Zanele Tshoko and together the two topped the podium in KwaZulu-Natal this weekend.

Acting as mentor for the team, Kachelhoffer had more than just personal ambitions on her mind when she made her move to win – she was also looking after the fortunes of Tshoko.

“My role is to help the younger riders change their style of riding, to push them to be more aggressive and to try something new,” said Kachelhoffer.

“Zanele and I formed the breakaway I kept pushing her so that together we could create a gap between us and the bunch,” she said.

“I could see she looked at me with these eyes that said she can’t push anymore, but I kept telling her to dig deeper and stick it out. 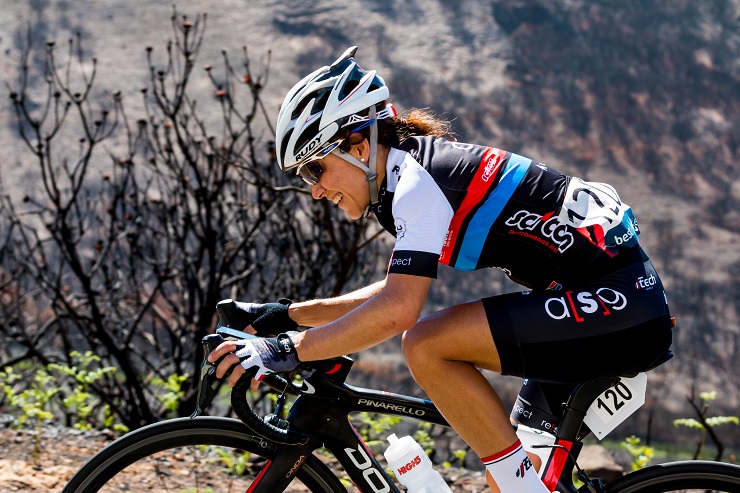 “This weekend is something she’ll hopefully remember for a long time because I hope it’s had some positive impact on her.”

Kachelhoffer said after riding overseas for almost seven years, her role as mentor for the team was her way of giving back some of her knowledge.

She said she enjoyed working with the team in a mentorship role as the girls had a strong desire to improve.

“It’s important for me to encourage them and keep them motivated as we go forward.”

She said her role extended beyond the technical aspect of racing as she also assisted her teammates with management issues.

“Even though I’ve been with the team for a while now there are still a few learning curves, not just for me, but for everyone.

“With my experience, I find it easy to approach management. Sometimes the younger girls don’t, so that’s where I can help.”

Kachelhoffer finished third overall in the five-day Bestmed Tour of Good Hope in March, her first major race with the team, and said she had seen great progress in the team since then.

She said Tshoko was one of the riders who had shown vast improvement during her stint with the team.

“She is a talent for the future. She’s come on in leaps and bounds in training and this weekend showed that.”

Chante van der Merwe and Skye Davidson were two other riders about to make an impact, said Kachelhoffer.

“I love to see change and I can definitely see that on the team. The personal reward behind being a part of this is so satisfying.”