It has been a rollercoaster year for national representative Sithembiso Masango as he put lessons learnt in Europe into practice at the SA National MTB Championships at Mankele in Mpumalanga on Saturday.

Masango got the opportunity to experience international competition when he was selected to represent South Africa at the Marathon World Championships in Singen, Germany, last month. 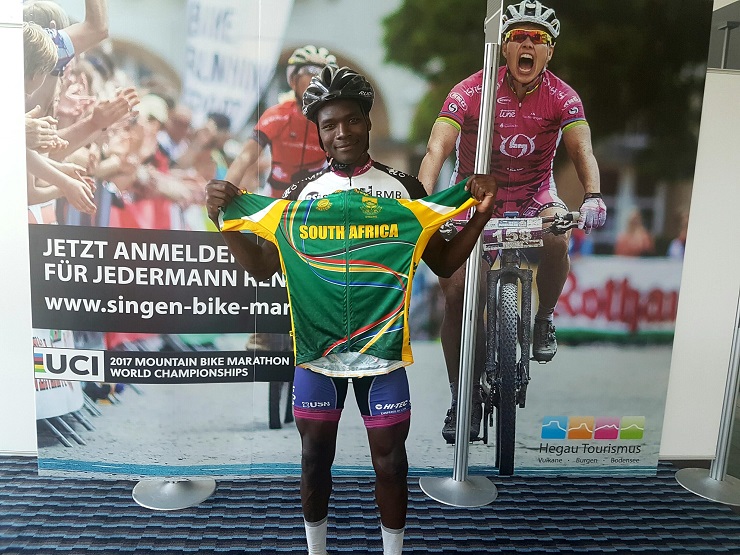 Sithembiso Masango, posing with his national team jersey before the world marathon champs, has had a year filled with triumphs and tribulations, but the RMB Change a Life MTB Academy rider said he’d learnt many lessons along the way. Photo: Amy McDougall/Gameplan Media

He was able to complete the 98km event, but said he’d been disappointed with his performance after his chain broke and he finished at the back end of the field.

“I was trying to represent my country but I failed,” said Masango, who hails from an area just outside Wartburg in KwaZulu-Natal.

The 29-year old said this year had been one filled with many difficult situations and hard-learnt lessons.

“In Germany I learnt that if you are going to the world championships, then you need to look after all parts of your bike.”

He said he’d realised it wasn’t always necessary to jump the gun in the early stages of races as there was a lot of ground available on which to make up time.

Having taken these lessons to heart, the RMB Change a Life MTB Academy rider returned home to place seventh in the cross-country race at the national champs behind winner Alan Hatherly.

“Last weekend I had a good race because my bike didn’t give me any problems. It was a tough challenge but I tried my best and I’m happy about that.”

In the three years since meeting him, he said he had seen a dramatic change in Masango as well as his riding.

“Once he was getting lekker food, a place to stay and guys to train with, coupled with his passion, the sky was the limit for Sithembiso.

“He quite quickly went into about the top two (within the academy) with team captain John Ntuli.”

Dreyer said Masango was a great example of the ago-old adage “what you put in is what you get out”.

“He’s put in a huge amount and he’s finally going to reap the rewards.”