Ashleigh Moolman-Pasio‘s determination in overcoming a serious hip injury came to fruition when she finished seventh in the elite women’s individual time-trial at the UCI Road World Championships in Bergen, Norway, on Tuesday.

The national champion in the solo discipline said she had been working on her time-trial skills for the past few years, but this season was the first that she felt confident enough in here ability to target a top result.

She set on the 21.1km course determined to finish in the top 10 and her result surprised many, including herself. 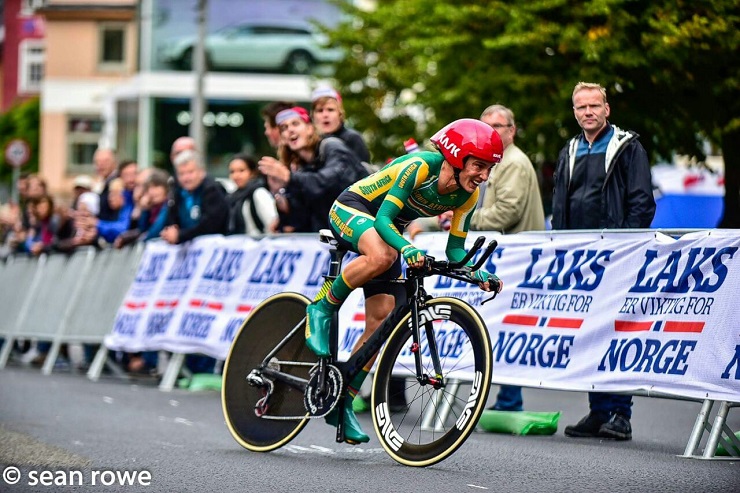 “I knew the course was a tough one and, after the biggest climb, more or less halfway through, we started a long and very steep descent,” said Moolman-Pasio, who added she knew it would not suit her light frame.

She said a top five would have been a major bonus, but knew the fast descent would turn the tables against her.

“How it worked out in the end is that the downhill definitely made a bigger difference and that was very evident because at the top of the climb I came over in fourth position.

“I then lost the other positions to much bigger girls because they made up the advantage on the downhill.”

She was lying fourth when she finished her run, but slowly slipped down the leaderboard as the pure time-trialists crossed the line.

An agonising wait ensued and Moolman-Pasio questioned whether she would be able to remain in the top 10, let alone the top five.

“At the finish what was really going through my head was how much I had lost on the downhill and who would be able to make up the time to finish ahead of me.

“You can’t help but think about what you could have done differently and you’re constantly rewinding through it all.”

In the end, the Cervélo Bigla rider said it was important not to get caught up in the “what ifs”.

“Beforehand, we look at the course and went through it a few times on the road bike, on the TT bike and in the car to make sure we study the lines.

“It’s not just about pushing the biggest power; it’s also about how you take the corners or how you use the road so I was happy to keep my composure and concentration despite going really hard.”

Moolman-Pasio said the race had gone as well as she could have hoped for, despite the rain that started halfway through.

“I was really happy with the lines I had taken and how I’d cornered, so in that way I knew I had done everything I could to get to the finish as fast as possible,” she said.

After her bronze medal in the team time-trial on Sunday, she said her motivation was high ahead of Saturday’s road race, where she will be supported by debutant Chane Jonker.

“I have to keep in mind that she doesn’t have a lot of experience, it’s her first world champs, so I’m going to have to do my best to race a tactically smart race if I want to be in there for a good result.

“I’m in the best shape I’ve ever been at a world championship so I’m hoping to keep cool, calm and make the right moves and decisions.”

Click here to view the latest news and results from the UCI Road World Championships.