Matt Beers and Alan Hatherly were a formidable combination as they set out to complete the Cape Pioneer Trek, but with the latter being relatively new to multi-day stage racing, they were unsure of what to expect.

The Trans Baviaans winner and national cross-country champion agreed their initial goal had simply been to secure stage victories during the ninth edition of the event.

The Spur RedE team got off to a strong start, winning the opening 96km stage by 55 seconds, a lead that served them well as they fought to stay ahead of defending champions Nico Bell and Gawie Combrick of NAD Pro. 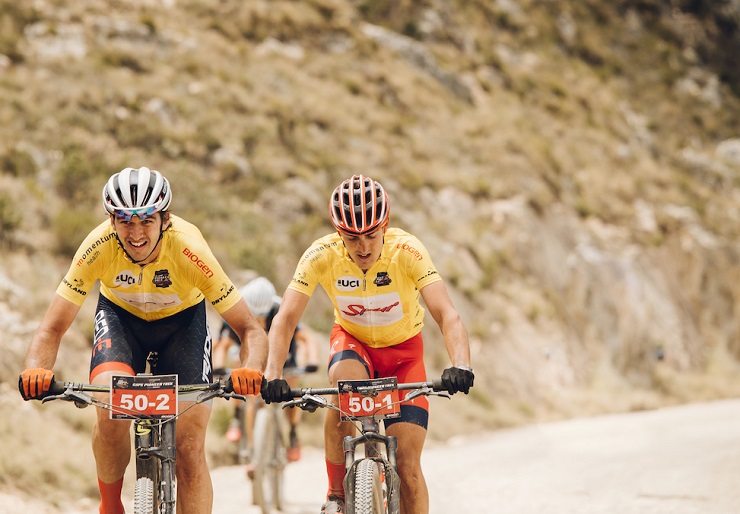 “NAD were our biggest competitors. We knew they’d be there at every move and would be the guys to beat,” said Beers, who finished third last year after attempting the event once before.

The young housemates’ form continued as they racked up win after win on each of the days and their mindset soon changed when they added a further 30 seconds to their lead after stage four, the mid-week time-trial.

Beers, who said the fourth stage added a “cool” dynamic to the race, admitted yesterday’s 95km stage, which included an 8km stretch up the Swartberg Mountain to the finish, was one of the toughest.

“Half way through there was a really nasty climb, which looked tiny on the profile, but it was very, very steep and rocky so we had to run up there,” he said.

“That bit your legs because after six days of pedalling, when you have to run, your muscles go into a bit of shock.”

After 2 700m of climbing yesterday, tired legs were the greatest challenge for Beers today, but the undulating route suited his teammate to a T.

“We put pressure in the early stages and with there being no flats we played it tactically smart,” said Hatherly.

“NAD stuck with us and kept the pressure on us too, but we stayed together all the way to the line.”

Last year’s winners were finally rewarded as they took their first stage victory of the week, crossing the line two seconds ahead of Beers and Hatherly and finishing second overall. KMC FruittoGo’s Bram Rood and Gerben Mos finished third on the stage and overall.

“We had a big battle with NAD throughout the week. They were really strong and didn’t really have a bad day so they were really good to compete against,” said the Spur rider, who added the overall challenge had exceeded his expectations. 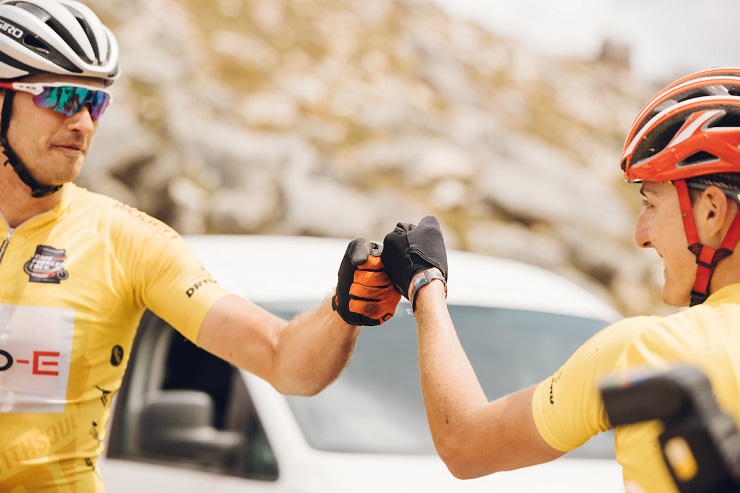 “As a team we work so well together with our riding styles, which you can see in the results. Matt’s power on the flat ties in with my climbing and single track abilities, so between the two of us we have a really good mix.”

After 553km of racing and more than 11 300m of climbing, Beers said their victory was still surreal.

“I remember doing this race in 2014 and I had to pull out because my body was so shattered. Back then I thought I would never be able to do this, that it was impossible.

“Now here we are, winning it. It’s quite incredible how things can change. I will definitely keep this one close to my heart.”

Ariane Lüthi and Amy McDougall were crowned champions in the women’s event, followed by Sabine Spitze and Robyn de Groot, who had steadily been closing in on them over the final days. Ila Stow and Marianne Bergli placed third after Frankie du Toit and Nicky Giliomee were disqualified.

More news and results from the Cape Pioneer Trek can be viewed here.