In their first appearance in the two-day event, which started and finished at the Rhebokskloof Wine Estate, the Flandria Cycles team won both stages to take the top spot on the podium.

They were pushed all the way by defending champions Pieter Seyffert and Hanco Kachelhoffer (Ellsworth-ASG) today in the 40km stage, but held on for the overall victory. 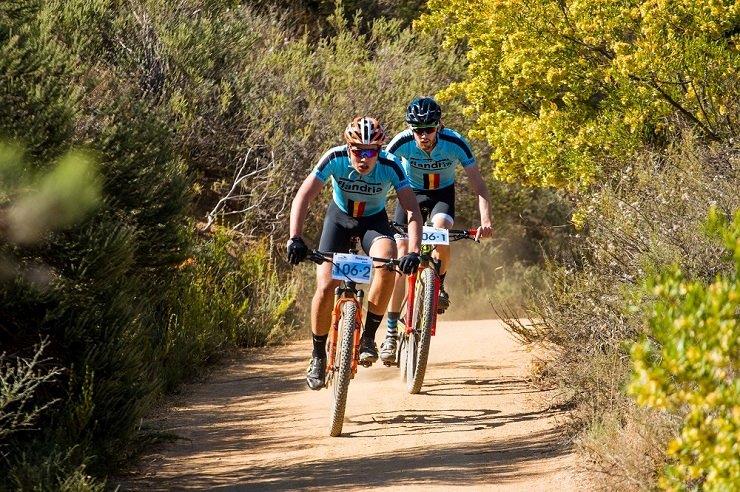 Rossouw Bekker (front) and Robert Hobson won the Sanlam MTB Invitational title at their first attempt when they won both stages of the two-day race near Paarl in the Western Cape. Photo: Robert Ward

Seyffert and Kachelhoffer, third on day one, moved into second place on the general classification, ahead of Aiden Connelly and Rogan Smart (Bikeshop).

Hobson, who is studying in Stellenbosch, said he and Bekker, an 18-year-old Paul Roos scholar, were delighted with the outcome, having had no great expectations going into the race.

“We have had a bit of a break recently so we were pretty nervous going into the first stage,” said the 19-year-old.

He said today’s route suited them as there was a lot of climbing in the first 25km.

“We are both reasonably light and climb quite well so we were able to sit on the front and set the pace.

“Pieter and Hanco were always with us and even when we dropped them on some of the climbs they would come back.”

Hobson said he had ridden the trails on Paarl Mountain often in the past and knew exactly where the last long climb before the final stretch of single-track was.

Hobson proved he was a rider for the future after winning both the Ride2Nowhere (alongside Erik Kleinhans) and Karoo2Coast in September, but said he was focusing on his studies for now.

The women’s race was won by Halcyone Muller and Heidi Nieuwoudt, with mixed honours going to Corne Barnard and Cecilia Roberts.