HB Kruger defied all odds when he won the main 25-mile race at the Paarl Boxing Day track event on Tuesday.

Kruger, a mountain-bike specialist, beat David Maree by approximately half a lap. 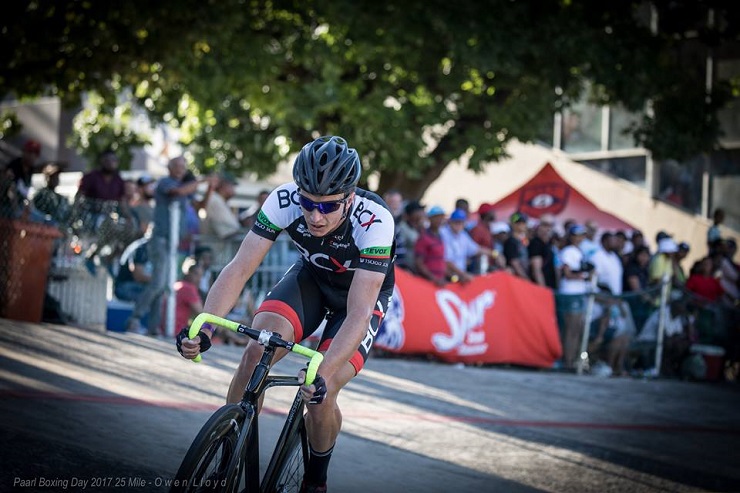 Kruger was clearly over the moon with the result, after beating Maree, who had enjoyed his most successful Paarl Boxing Day in four attempts.

“I was a bit flabbergasted at first, but it has sunk in nicely. It’s an amazing feeling.

“I haven’t been on the track in about two years. I’m really chuffed with myself,” he added.

The BCX rider said he made sure to not put too much pressure on himself prior to the race.

“I wasn’t quite sure how I would feature and what my legs would feel like on the track, especially after taking a break early December for two weeks.

“I’ve been doing a lot of base training on the mountain bike. I didn’t set any high standards for myself, and I think that lifted the pressure a bit, which helped.”

Kruger, who won the PwC Great Zuurberg Trek with Waylon Woolcock in May, said initally he was even a bit hesitant to take part in the race.

“The organizers only approached me about a month ago and asked if I’m interested,” he said.

“A week after that, Nolan (Hoffman) leant me one of his bikes and I took that as a sign to take part.

“It has always been a bucket list event for me. I only had about three hour sessions training on the track in Paarl for preparation.”

Kruger said he chose a bigger gear than usual and in comparison to the other riders.

That suited his style of riding, Kruger said, but tactically he put his team first.

“It was difficult laying out a specific plan on the track – what was important that our three BCX riders (him, Hoffman and Maree) made it to the top.

“We know each other well and we had a good understanding how to read the race. We were very lucky that everything panned out to our favour.

“I was a bit of an underdog for the race and I wasn’t really watched. When I made my original slip away, I don’t think the other riders even worried too much about it.

The 26-year-old said the nature of track racing was something to get use to.

“It was difficult adapting to bunch riding, there were a few scary moments for me.

“I’m also not use to sticking to one gear throughout a race; in mountain-biking I would adjust the gears according to the terrain and gradients.

“I’m really grateful my body managed to adjust quickly, and I’m glad BCX had three winners on the day,” he added.

NEXT ARTICLE | In the Bunch show – Best bloopers from 2017