Matt Beers surprised many, including himself, when he won the overall Mpumalanga Tour, as well as the King of the Mountains title, when the six-stage event ended at Loskop Dam today.

The NAD Pro rider began the final stage in third place overall, 13 seconds behind Eddie van Heerden (MyVelo) who was in the yellow jersey.

Beers, who won the Trans Baviaans in August last year, finished fifth in the bunch sprint to the line, and it was enough to clinch the title.

The 24-year-old, who had been regarded mainly as a mountain-biking specialist, had joined NAD only a month ago. 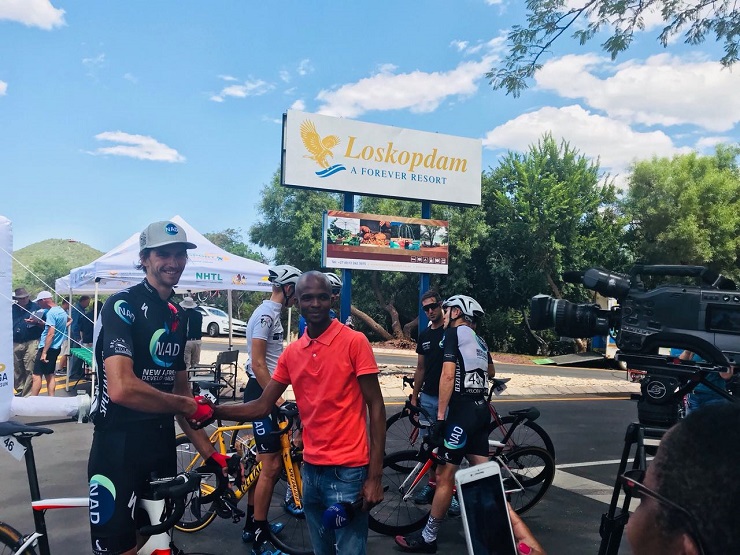 Matt Beers, pictured being congratulated after the final stage, was surprised by his overall victory at the Mpumalanga Tour, which ended at Loskop Dam today. Photo: Supplied

He entered the Mpumalanga Tour with the idea that it was going to be merely part of his team’s training, but the longer the race went on, the more they realised they had a chance of winning.

“Using it as a training race, we thought it was going to be a tall order to win,” Beers told In the Bunch today. “The Cape Epic was always our main goal when the season began.

“But once we got into our rhythm, with our legs feeling good, we realised the team had a chance to win,” he said.

His teammate Nico Bell had worn the yellow after stage three but they lost it the next day. However, they had four riders in the top seven at the start of the final stage.

“The tour really came down to the last day and we knew any one of us could win the overall title,” a delighted Beers said.

They were tactically smart on the final day, he added. “Gawie Combrinck was leading for most of the way and containing Jayde Julius at the front.

“At the 140km mark, I figured I had to make something happen, so a few other riders and I attacked until we caught them.

“We weren’t too worried about Jayde, because I was about 40 seconds ahead of him on general classification.

“Nico was controlling the other bunch behind us to enable me to get a good lead.

“Our team tactics, today and over the whole tour, worked out perfectly,” he said, adding that their teamwork had set them apart from the rest of the field.

“We were always there for each other; no one was selfish. Nico and Gawie have a lot of experience of riding in Mpumalanga and they helped by talking us through each stage.

“We always had an idea how to approach each stage. Road racing is super tactical; we really had to be sharp and aware of our surroundings.

“It was my first road tour and to win it was incredible. I was in disbelief; utterly surprised when I realised I had won. I had goose bumps.

“It was a great way to start the season. Our team was really smart throughout. Without them this would not have been possible,” Beers said.