Former national champion Anriette Schoeman got her season off to a flying start when she won the 99er Cycle Tour in Durbanville, Cape Town, on Saturday.

Schoeman took a brief hiatus from the sport after the death of her mother in November, but the enforced break and change in training schedule ended up boosting her fitness during the off-season.

“I had to take some time out for almost a month,” she told In the Bunch today.

“I decided to put all my energy into riding again in December and it helped me to focus on certain things. I have really trained hard over the last month-and-a-half.” 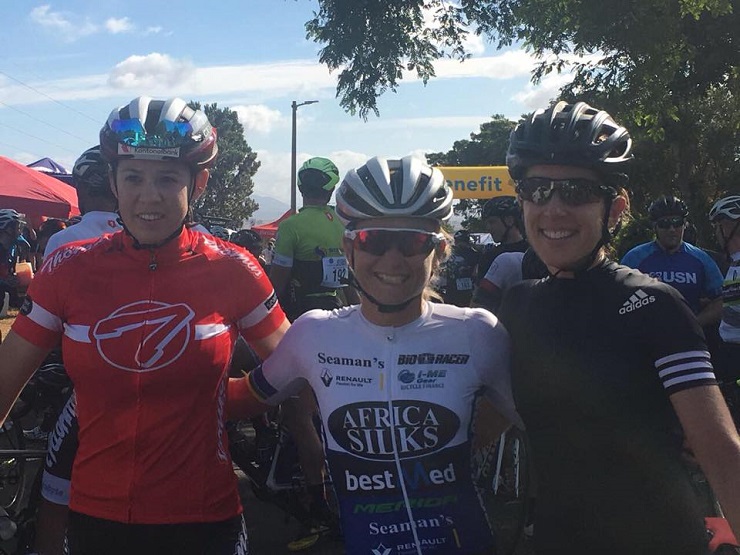 Due to the SA National Road Championships taking place on the same day in Oudtshoorn, she originally anticipated an easier ride at the 99er, but said she completely “underestimated” the strength of the competition.

She said many riders who were training in the area for next month’s UCI Mountain Bike World Cup in Stellenbosch used the event as part of their preparation.

“A lot of the riders are training for the World Cup and Cape Epic. The base of any cycling discipline is road, so some of those mountain-bikers train in road races to help them with speed and endurance.”

Swiss mountain-biker Allessandra Keller, who is ranked 12th in the world in the cross-country discipline, is an example.

Schoeman, who beat her by eight seconds, said Keller pushed her to the limit in the 102km race.

“She really made life hard for me on the day; she is really strong and that is understandable considering her world ranking.

“What I first thought would be an easy day out racing turned out to be one of the hardest, but I’m really happy with the win and I enjoyed the finish.”

Schoeman – who rides for Africa Silks-Bestmed and represented South Africa at the UCI Road World Championships in 2001, 2006, 2008 and 2010 – said she was focusing on local races for now.

“I have no international aspirations or plans for the year,” said the 40-year-old. “That’s why I didn’t take part in the SA champs because it wouldn’t have made any difference to me.”

She wanted to do well in the Herald Cycle Tour and Cape Town Cycle Tour in the coming weeks, said Schoeman.

“I’ve been struggling a bit with a back injury so I’ve decided to pace it down with mountain-bike races. Every three months I normally take a few days off to reassess what I want to do for the rest of the season.”