Gert Heyns won his second race in as many weeks with a victory at the 80km Herald Cycle Tour MTB Race in Addo yesterday.

Heyns, who won the 99er Cycle Tour road race in Cape Town last week, believes having two wins under his belt – in different disciplines – stands him in good stead for the season ahead.

“It was great to win two races in a row so early in the season,” he said. “It is a big race in the Eastern Cape and it was very enjoyable. I’m feeling quite good at the moment.

“Training has been going well and I am very happy to continue my winning streak.” 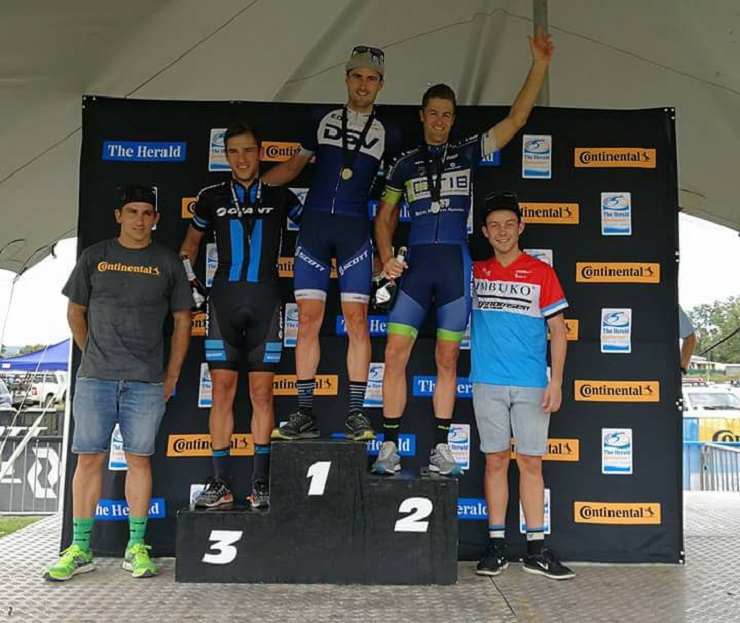 Gert Heyns, pictured here atop the podium, won his second race in as many weeks with a victory at the Herald Cycle Tour MTB Race yesterday. Photo: Supplied

The Team DSV rider, who won the same race in 2015, said he had developed a liking for the route.

“It is in a beautiful area and there are a lot of good single tracks. It is probably one of my favourite one-day races in the country.

“It wasn’t too long or short and I was able to ride flat out the whole way. I also enjoyed the few climbs on the Zuurberg Pass.”

Tactically, Heyns said, it was important for him to get away on the single tracks.

In the first 20km, he said, everyone rode together and maintained a fast pace. “I tried to get to the front once we hit the single tracks in an attempt to stretch the race out.

“Andrew [Hill] set the pace, but I managed to go past him on the single track descent in Heyterdale. I know that area from racing there in the past.

“I opened a bit of gap [on him] when we entered the Zuurberg Pass.”

In the context of the race that move enabled him to gain the advantage, Heyns added. “I had to build a big enough lead before the open roads in the last 30km.

“It was quite challenging to stay in front. Andrew and Nicol [Carstens] were chasing hard all the way.

“They almost reeled me back in, but I managed to build a few more time gaps.”

Ultimately Heyns beat Hill and Carstens, second and third respectively, by less than a minute.

“We had quite a dice in the end,” he said. “It was good to be pushed all the way and win under the circumstances.”