ProTouch’s Reynard Butler was “ecstatic” to have repaid his team with a tight victory in the 116km Ride for Sight road race in Boksburg today.

Butler has largely ridden under the radar this year, having played merely a supportive role for his team at the Mpumalanga Tour while not featuring in the Fast One Cycle Race a few weeks ago.

He came fourth in the SA National Road Championships elite road race last weekend. But, for him, today’s win was not just a personal achievement.

“It was a team victory for me,” Butler told In the Bunch today. “My team had such a great cause behind it and it was a good way to repay them.

“It’s good to have my first victory under the belt so early in the season. It showed good signs for my form for the races to come.

“We will have to build on this and do our best as the season unfolds,” he added. 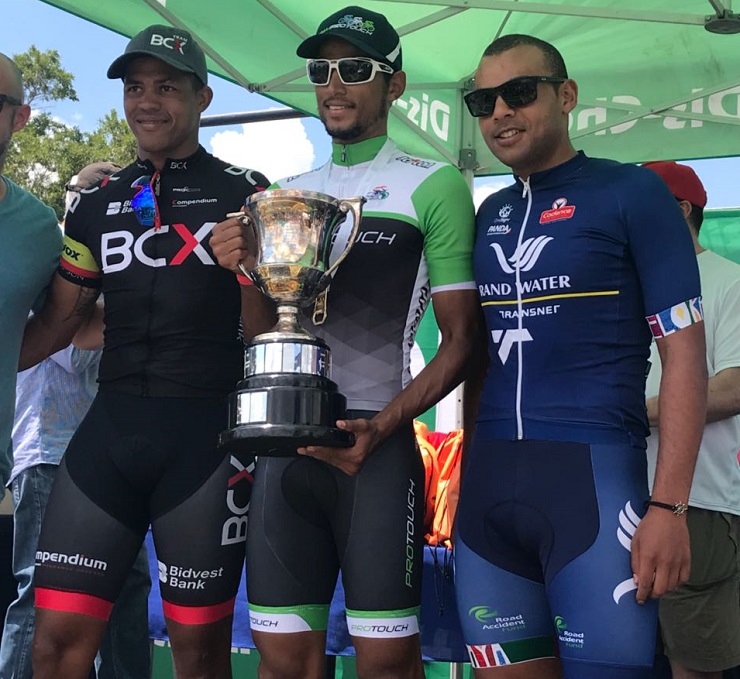 Reynard Butler (centre) was “ecstatic” to have repaid his team with a tight victory over BCX’s Nolan Hoffman (left) and Randwater-Transnet’s Shameeg Salie in the Ride for Sight road race today. Photo: Supplied

Butler finished the race in 2:39:54, winning in a seven-man bunch sprint for the line.

“We [ProTouch] had a tactic going into the race, but we did not execute it 100 per cent.

“I had to take the initiative when things didn’t work out and thankfully I managed to finish it off in that final sprint.”

Butler, who impressed at the Tour Ethiopia two years ago, said his team’s goal heading into the race was to test their sprinting abilities on the flat tracks.

“It was important to test our form in the sprints, especially against fast guys like Nolan [Hoffman], Clint [Hendricks], Tyler [Day] and Ryan [Harris].

“It was a pretty fast route, especially going into the south side where there were open and exposed areas with cross-winds.

“The strong winds ensured the race would end in a reduced group.”

The race was very competitive, Butler added. “It was a sprinter’s race so it got heated.

“We all knew it was going to come down to a bunch sprint, so all the riders wanted to get in front.

“There were a lot of strong riders and I had to watch each of them very carefully. I had to try my efforts properly, in the right areas.

“We managed to take control after being on the back foot early on and after that there were actually very few challenges.”