Reynard Butler is relieved to have won the 98km Emperors Palace Classic road race, saying the event was “very competitive”.

ProTouch’s Butler, who finished third in the Cape Town Cycle Tour two weeks ago and won the Berge en Dale road race a month ago, said his team wanted to “set things straight” ahead of the rest of the season. 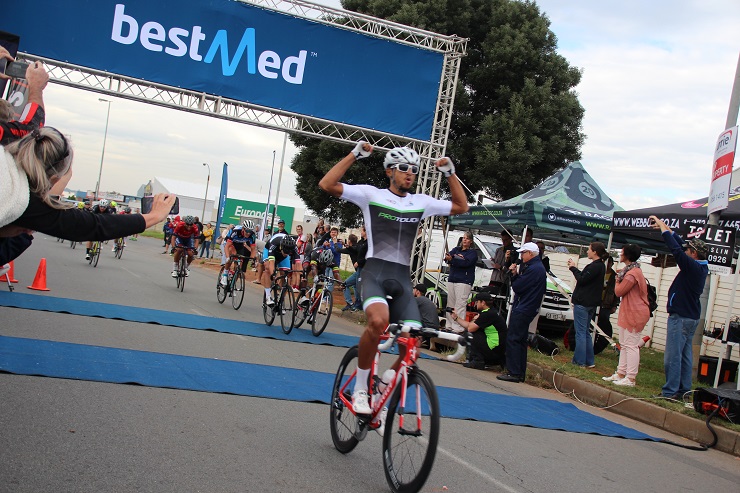 Butler expected an onslaught from many of the other teams who were seeking their first win of the season.

“We knew it was going to be a really tough race,” Butler told In the Bunch.

“Many of the others, such as Tyler Day of Barzani Pro, Calvin Beneke of Luso and Ryan Harris of Office Guru, were very eager to get their first wins of the season.

“Then you can never underestimate BCX either, so the stakes were high.”

Butler described the course as “fast and flat”.

“Nobody really wanted to let anything go throughout,” he said. “Ultimately we knew it was going to come down to a bunch sprint to the finish.”

Fortunately for ProTouch, Butler said, they were confident in their sprint train and lead-out.

“We just had to make sure we stayed in control of the race and that no one got away near the end. There was a break of three riders heading towards the end, which looked dangerous.

“We then put a few guys near the front to control the gap, while BCX also looked to have some intention of taking it to the sprint.

“Tactically, we were smart though. The finish was a bit technical, with a few sharp corners going left and right before the last kilometre.

“We [ProTouch] had to make sure we stayed in the front and the guys kept me out of trouble – especially away from the crashes that occurred at the back of the group.”

That ensured Butler had a clear run into the finish. “The guys executed the lead-out perfectly,” he said.

“You cannot always plan that before the race. It is always easy to say you want to have as many guys in the front as possible, but when you do other riders become attentive and try to nullify your attacks.

“Fortunately, we did not have many obstacles. All of the other teams also wanted it to come down to a sprint finish, so that played a bit in our favour.”

His team’s next focus will be on the inaugural four-stage Tour de Limpopo, which is taking place from April 23 to 26.

“We have a big objective for the race,” he said. “We want to perfect our preparations for the team time-trial [on stage three].”