Stellenbosch Cycle Tour champion Liezel Jordaan is joining an international cycling team for their fifth season of racing in the United States next month.

Australia and New Zealand-based team Roxsolt Attaquer was established in 2013 with an initial focus on criterium racing, but this year they will return to their roots and include both professional and developing riders.

“The team will see riders from Australia, New Zealand, South Africa, Switzerland, Italy and the UK. I will race with them from April to the end of July,” said Jordaan.

The 22-year-old added that since the beginning of the year she had discussed with her coach opportunities to race in Europe. 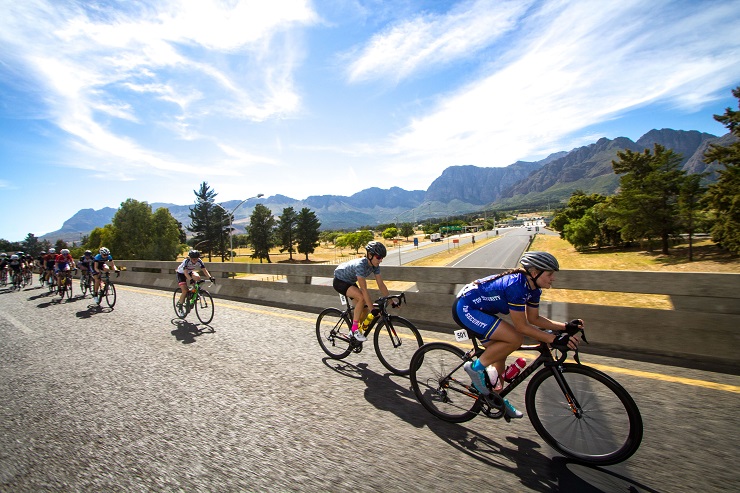 Liezel Jordaan (seen in front) during this year’s Bestmed Tour of Good Hope. She is joining the Australia and New Zealand-based team Roxsolt Attaquer for a season in the United States. Photo: Robert Ward

She was planning to attend a three-week racing camp in Holland, but it was cancelled shortly before the SA National Road Championships in Oudtshoorn earlier this year.

Jordaan went on to win the women’s 29.2km individual time-trial.

“I was pretty bummed, but knew that I shouldn’t lose faith. It was then that I decided to focus only on nationals and it paid off by my winning the ITT,” she said.

“After that I could focus a bit more on racing abroad and kept asking around until one day the organiser of the racing camp contacted me and told me there was a team with an opening. Without thinking twice, I immediately said yes.”

Jordaan, who will be riding as a domestique, said she would like to build up as much experience as possible and take everything in during her time overseas.

“Seeing I’m still new to an elite level of racing I have a lot to learn and experience. I hope I can bring what I learn back and apply it to racing in SA, as well as share some of the things I learn with my fellow riders.”

In return, she said she would give her absolute best for the team in whatever situation they found themselves so they could get a good placement for their leader.

“I’m extremely excited and I can’t wait to join my team. I will probably become very nervous closer to my departure as this will be my first time abroad and flying on my own, but I look forward to every moment,” said Jordaan.

On her return her first event will be the Thys du Toit Memorial MTB Challenge, which will also serve as the Western Province XCM Championships.

“After that I might do the Amashova [Durban Classic], 947 [Cycle Challenge], Double Century and Stellenbosch Cycle Tour. If everything works out, I might also do the SA National Track Champs.”