Reyneke would have partnered Charl-Pierre Esterhuyse, after securing their entry by the end of February, and the pair had high ambitions of finishing well within the top 30 and top five South African teams.

Unfortunately, two weeks ago Reyneke crashed and ended up with a cracked collarbone. His bike was also written off in the process. 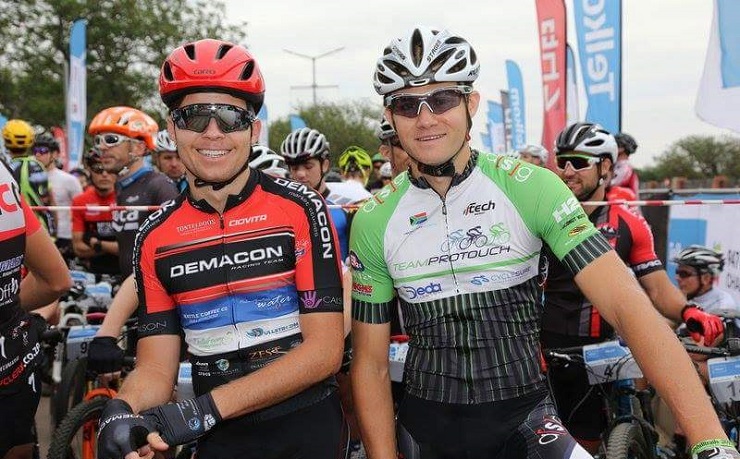 Protouch rider Stephan Reyneke (right) and ex-pro Barend Burger have formed an unexpected partnership for the Cape Epic that kicks off on Sunday. Photo: Rika Joubert

“He immediately started with rehab and guaranteed me that he would be good for the Epic,” said Esterhuyse.

“It has been about three and a half weeks of recovery and a lot of planning to do (bike and everything), but he’s still up for it.”

Reyneke did his first 100km mountain bike ride after 18 days and he felt great being back riding outdoors.

“Physiotherapy really helped a lot and my physiotherapist went the extra mile to make this all possible. I still have some rehab to do, but the progress is looking good,” Reyneke said.

The 24-year-old Reyneke said his lead-up to the Epic had been very good and he was in good form when he rode the Tankwa Trek.

“The crash changed my game plan a little bit, but I was back on an indoor training bike three days after breaking my collarbone. I’m confident that I will be ready for next week.”

“I mean, what are the chances of both of us breaking our collarbones a month before the Epic? Over 10-plus years of cycling and neither Stephan nor I have broken anything,” said Esterhuyse, who will now be assuming the role of team manager and soigneur during the eight-day stage race.

Burger, who also works full-time as owner of Singletrack Cycles, will take over from Esterhuyse.

“To be honest, I’m a bit worried. It’s not road cycling where you can hide in a bunch really, but because it’s our first Epic we would like to do our best,” said Burger, who has been racing for 16 years and is a two-time Panorama Tour winner and Sabie Experience runner-up.

Esterhuyse felt confident about the unexpected partnership between Reyneke and Burger, who will participate in their first Epic together as the UCI team Breedenet.

“I know that Stephan can suffer and Barend, who is a diesel engine, has all the experience. The two have raced as a team before at the World University Cycling Championships, MTB Marathon World Championships and the Panorama Tour.

“So, as marketing executive of Breedenet and semi-pro mountain biker, I’m not worried about the partnering,” said Esterhuyse.

Reyneke said he was very excited to be riding with Burger and their goal was to achieve a top-40 finish.

“Epic has been a major goal for me, so I think giving up on that was never really an option. I went through lots of emotional battles. My mind wants to ride but if your body is saying differently you have to listen.”

Burger, on the other hand, currently has his focus on the prologue as he knows anything can happen at the Epic.

“It’s the hardest mountain bike stage race out there. To have a successful event we will need to have as few mechanicals as possible. We’ve built our bikes ourselves and made sure everything is running smoothly. We should also not stop at every waterpoint.

“I always try to be prepared and to think ahead about what could happen during each stage.”

NEXT ARTICLE | Luthi, Michiels to tackle Champions Race ahead of Cape Epic