Kevin Benkenstein is planning to push himself to the limit in the 361km 36ONE MTB Challenge in and around Oudtshoorn, starting on Friday.

Benkenstein won the mixed category with partner Mikayla Webb in a time of 18:34:08 last year and riding solo this weekend he says he hopes to finish in under 15 hours.

Last year Dutchman Ramses Bekkenk made headlines when he broke the 14-hour barrier.

“I want to give it my best and empty the tank a bit,” Benkenstein told In the Bunch today. “I want to push myself to the absolute brink and in my mind I want to clock less than 15 hours.

“I am aware the record is 14 hours, but having not raced it alone before I think that will be pushing it. Ramses [Bekkenk] is far more established than I am.

“I would like to be in the front mix of the race for some time to give myself a chance to push it and see where it takes me.” 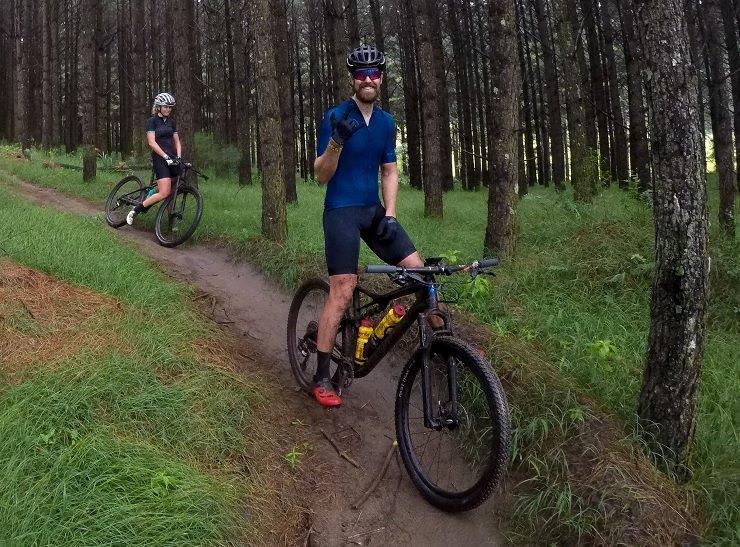 Kevin Benkenstein, pictured here, is planning to push himself to the limit in the 361km 36ONE MTB Challenge in and around Oudtshoorn, starting on Friday. Photo: Supplied

Benkenstein, who finished third in the 1070km The Munga in December and who thrives on long-distance mountain-bike events, expects the race to be faster than usual for ultra-marathons.

“But the difference with the 36ONE compared to The Munga is that, although it is much shorter, it is very fast and really hard from the beginning.

“Last year the front guys got to halfway in just under seven hours, which is mind-boggling for 180km. We are looking at average paces between 26 and 27km/h.

“The biggest challenge I foresee will be to consistently keep up that hot pace. I do not usually race in shorter races, so I do not have the biggest top-end.

“It will be interesting to see how I come out [of the race] with that pace.”

Bekkenk is set to take part again this year. “I do not know much about him, but he will surely be the favourite after breaking 14 hours last year.

“I am not sure if Bennie [Viljoen] and Dusty [Day] are taking part this year, but after completing the podium last year they should also stand a chance.”

He was especially impressed with Day last year, Benkenstein said. “Dusty blew my mind. He is a 100 to 200km road rider and to go out and do the 36ONE in his first big endurance race was incredible.

“He is such a strong athlete and I hope he will take part again because I want to see how he does.”

The race, which also breaks into the night-time, appeals to Benkenstein. “It [the race] is so well organised and unique in that we get to ride through the night. I love riding after dark,” he said.

“It is such a good challenge to fight your tiredness and not sleep in and just race straight through the night.

“The race also has such a beautiful route with a great vibe at all the race villages and checkpoints. I am looking forward to it.”