The 22-year-old Hatherly, who usually competes in the under-23 age category, lined up against some of the best elite riders in the world. So he knew he had his work cut out for him before the race.

Hatherly only raced for the first time two weeks ago after breaking his left wrist when he crashed out of the Tankwa Trek in February.

“To come back and compete in a race at this level while also winning a medal is huge,” Hatherly said. “I am stoked with the outcome, considering.” 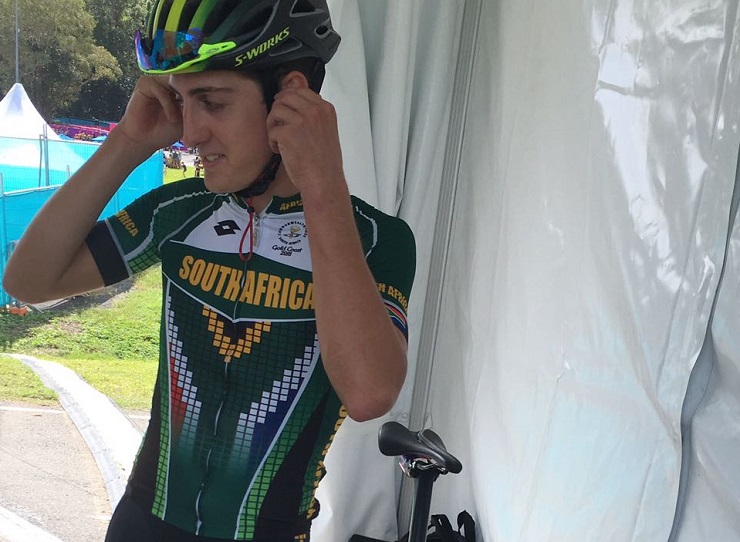 Alan Hatherly pictured getting ready before taking on the Commonwealth Games cross-country race on the Nerang Mountain Bike Trails in Gold Coast today, of which he won a bronze medal. Photo: Mark Ethridge

New Zealander Sam Gaze won the gold medal. It was his second major cross-country victory of the season after winning the UCI Mountain Bike World Cup in Stellenbosch last month. His compatriot Anton Cooper won silver, just milliseconds behind him.

“I literally raced against the best in the world today,” Hatherly said. “To finish third just 20 seconds behind [Gaze and Cooper] is a really good achievement, especially seeing it was my first big race after the injury.”

Hatherly said he was glad he put in enough preparation to adjust to the course and conditions.

“It was a super tough course. I am happy to have got here [in Gold Coast] two weeks earlier to adapt to the humidity.”

He said from the halfway mark in the race he and Cooper were “eyeing each other out”.

“Going into the final lap Sam [Gaze] then pulled in after a mechanical. I think he lost about five seconds from a tyre flat, but he came by flying and chased us down.

“I tried to go a little bit harder but on the descents I could feel my arms were getting tired so I thought I’d rather not risk falling and breaking my bike, while also risking my medal.

“I decided to play it safe, without slacking off. I managed to pull it off safely in third and I am happy with the result.”

Hatherly said “out of respect” he had moved over for Gaze when the New Zealander overtook him and Cooper.

“I did not sacrifice any time by moving over; it was out of respect,” he said. “I knew Sam had a chance of actually winning the race and I was on Anton’s wheel at that point, so I did not want to be that guy who would hold him up on purpose.

“Sam was definitely stronger; when he moved past he just disappeared.”

Hatherly said despite only recently overcoming the wrist injury his form was still good heading into the event.

“My form was perfect. I only missed three days of training through injury, so my form was as good as it could have been.

“It obviously showed in the way I was able to ride, but my physical strength may have been one per cent down on that last lap, especially when you know you are pushing your body to the limit.

“My arms felt a bit weaker than normal and that is why I had to play it safe, but I am still satisfied.”

Hatherly will now set his sights on the African Continental MTB Championships taking place in Egypt on April 21 and 22 before heading to Europe for the world cup season.