Team Sky’s Chris Froome was confirmed the overall winner following the 21st and final stage of the Giro d’Italia today, placing him among a select few riders to win three Grand Tours in a row.

The 115km stage, a flat 10-lap 11.5km circuit starting and finishing in the Via dei Fori Imperiali in Rome, was neutralised after the second lap, meaning the stage had no bearing on the general classification.

Riders were, however, still encouraged to “race” for the benefit of the spectators. All Froome had to do was finish and he did that on his pink bike while wearing the Maglia Rosa. 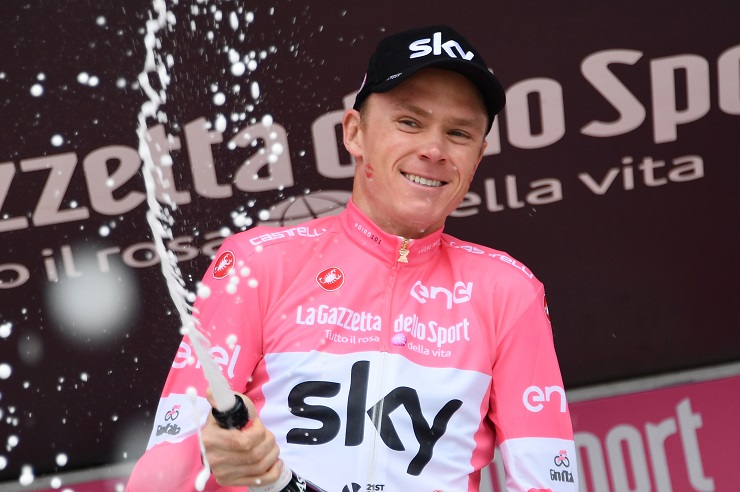 Bennett received a near-perfect lead out from his team as he followed Viviani’s wheel over the final 200m.

Viviani ran out of gas in the final few metres as Bennett sprinted to his third stage victory of this year’s Giro.

Froome in essence won the Grand Tour after stage 20, where he finished seventh. He joins Eddy Merckx (Belgium) and Bernard Hinault (France) as the only riders to win all three Grand Tours in a row.

Mitchelton-Scott’s Simon Yates (Britain) led the GC standings for the majority of this year’s Giro, having taken hold of the pink jersey after stage 6, which ended on top of Mount Etna.

Yates cracked late in the race when, on stage 18, his lead over Dumoulin was halved atop Prato Nevoso.

In dramatic fashion, Yates then not only lost his race lead, but fell out of the top-10 all together after stage 19, which was won by Froome when an 80km attack saw him solo to victory.

The solo win enabled Froome to jump from fourth into the race lead, with Dumoulin still nipping at his heels in second. He needed to beat Dumoulin by at least two minutes and 54 seconds to take the lead and he surpassed that by 40 seconds.

His seventh-place finish at the end of stage 20, beating Dumoulin in the process, gave him the overall spoils.

“It was great to be able to soak up the atmosphere here in Rome,” Froome said after the final stage.

“It has not quite sunk in yet [winning his third Grand Tour in a row]. It will over the next few days when I have had time to reflect.

“It was just incredible. It is any cyclist’s dream to have all three leaders’ jerseys in the space of 10 months. It is an incredible feeling.

“I am still pinching myself. I cannot believe I am here.”

The Brit said he was always “afraid” of targeting the Giro. “The race has so many demands. It is just so different to any other race out there.

“And to be here now, having won it, I just cannot believe it myself,” Froome said, after becoming the first British cyclist to win the Giro.