Wimpie Sander’s excitement was mixed with utter relief after his record-breaking victory in The 1000 Miler from Gauteng to Cape Town last week.

Sanders completed the 1 510km ride from Vanderbijlpark to Blouberg Beach in 5 days, 7 hours and 18 minutes. His time was nearly five hours better than the record that Sarah van Heerden and Cindy Theunissen set last year.

“Sarah and Cindy are fantastic riders and very motivated. It was a pity they didn’t join us this year,” he said after completing the race for the second time. 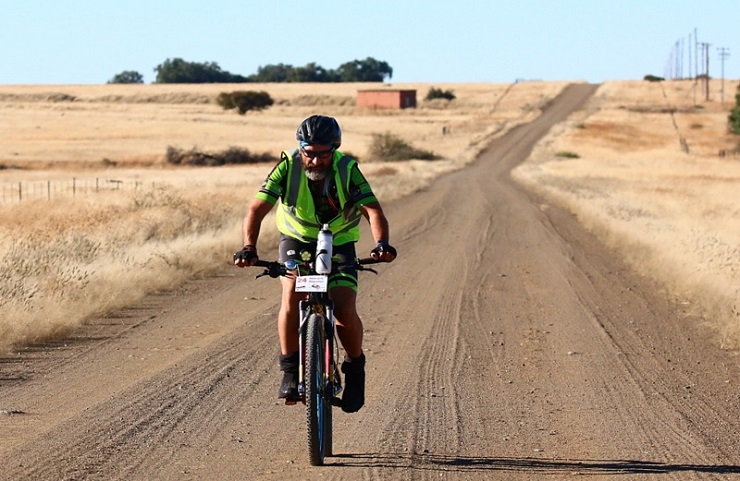 The friend who rode with him last year was also absent, so he was able to focus on riding instead of having fun, he explained

“I laughed so much last year and had such fun that I was just glad we finished in time. Winning was never an option. Now I’m not sure what I’ll do next year if John enters again.”

Sander, 46, emphasised that he was not a professional athlete or cyclist but “just a guy who loves cycling and riding as much as I can and when I can.

“My wife, Charmaine, says it’s a midlife crisis with no ending in sight. My love for cycling is my motivation. The people I meet and the places I see motivate me. Winning is simply a bonus, which I’m very grateful for.

“Giving up? There is too much to see to even contemplate the idea,” he said before telling about an amazing sight on this year’s ride.

It happened after he had left Fraserburg at 11.30pm on the Tuesday. On his way to Sutherland he refilled his water bottles at a windmill at around 2am.

That was when he saw “something unbelievable”.

“I actually saw a burning bush! At first I thought the lack of sleep was catching up to me, but then I realised it was full of fireflies. What a sight! It was something I’ll never forget. It reminded me of the story of the burning bush in the Bible.

“To top it off, I saw a shooting star; so bright and clear that I ducked.”

Sander said he loved the route from Sutherland to Bizansgat, where there was a climb that was different to all the others.

“It was full moon in the Karoo; picture-perfect riding conditions. It’s difficult to explain but I felt part of the surroundings.

“It’s is an experience that only nature provides. It can’t be duplicated, nor fabricated by man.”

He admitted that the stretch from Loxton to Fraserberg was challenging. There was a headwind most of the way, which made the riding difficult.

The event was marred by an unfortunate experience on the first day. At about 8:30 am, after they had done about 75km and were 15km from Koppies, two cars hit their group on the R82.

“One of the riders, Tim, suffered a shoulder injury and had to withdraw. His son had a bad roastie on his hip and also pulled out because they had wanted to do the race as a father-and-son combo.

“I suffered an injury to my left hand and hurt a couple of ribs again,” Sander said, referring to last February when he broke some ribs a week before the Lindley Gravel Grinder.

“I was hit so hard from behind that my bike’s saddle broke off underneath me. My bike was a write-off but Tim agreed that I could use his bike to Koppies.”

His injuries were strapped and the organisers agreed that he could continue on a replacement bike. He had to wait for his wife to bring one from Pretoria and was back in the saddle by lunchtime.

Sander has participated in many endurance events, including the 361, Transbaviaans, Cullinan 2 Tondeldoos, the Lindley Gravel Grinder and the toughest, according to him, the Attakwas.

“My dream is to do the Freedom Challenge. It’s definitely on my bucket list,” he added.