South Africa’s Ashleigh Moolman-Pasio achieved her goal of becoming the first African cyclist to podium in a Grand Tour when she finished second overall at the Giro Rosa, a tour she described as a “dream race”.

The 10-stage race, the only Grand Tour on the women’s cycling calendar, was won on Sunday by Dutchwoman Annemiek van Vleuten of Mitchelton-Scott with a final general classification time of 25:50:22. 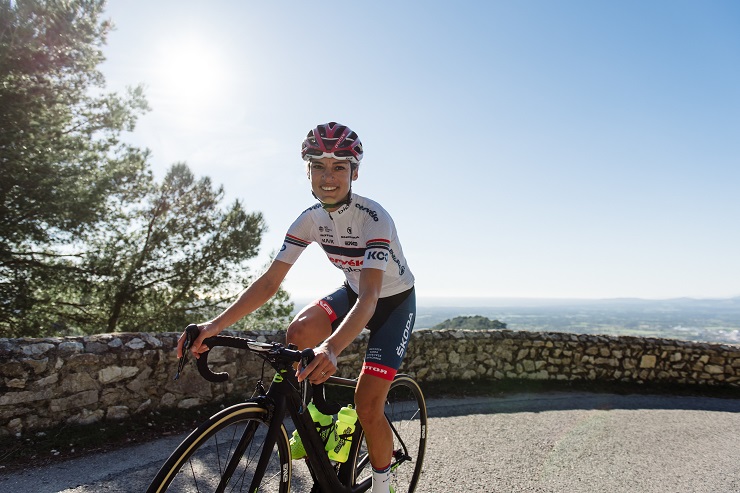 South Africa’s Ashleigh Moolman-Pasio achieved her goal of becoming the first African cyclist to podium in a Grand Tour when she finished second overall at the Giro Rosa. Photo: Velofocus

Cervelo-Bigla’s Moolman-Pasio finished just over four minutes behind her, with Australian Amanda Spratt of Mitchelton-Scott completing the podium a further two minutes back.

“As I wrote in a blog before the tour, the spotlight is always on men’s cycling and Douglas [Ryder] was speaking about how Team DiData were aiming for a first African to podium at a Grand Tour by 2020,” Moolman-Pasio told In the Bunch yesterday.

“It made me a bit sad that people don’t consider that it’s actually possible for me to achieve that as an African woman.

“The Giro Rosa is still a Grand Tour for us; it’s the most demanding race on our calendar,” she said. “So to be able to achieve a podium and make history was really special.”

Moolman-Pasio finished on the podium in three of the 10 stages – second in stages seven and nine and third in stage six.

After taking part in her first Giro in 2010, where she placed 17th overall, Moolman-Pasio identified the Italian Grand Tour as her “dream race” and a “goal” towards which to work.

“From the start I was always identified as a climber, so it was always my aspiration to win the Giro or do the best I possibly could.

“It played a big part in my development as a rider, especially after finishing in the top 20 in my first Giro [in 2010] with very little experience racing in Europe.”

Since 2010 her potential as a professional cyclist in an international peloton had been recognised.

Moolman-Pasio missed the race in 2016 due to her preparations for the Rio Olympic Games, before contracting a virus during last year’s event which forced her to withdraw after the second stage.

“After coming fourth in 2015, finishing on the podium started becoming a reality for me,” she said.

“This year, after the route was announced and we knew we were going to take on the Monte Zoncolan as well as an uphill [individual] time-trial, the race became a huge goal I set this year.”

Her team had given her great support in the build-up to the Giro, Moolman-Pasio explained.

“My team has been absolutely amazing in terms of how they supported my aspirations to podium at the Giro,” she said.

“We looked at every detail we could and we did all the necessary route recons. During the race the staff and all my teammates did everything they possibly could to support me in every way.

“It went relatively smoothly for us at the tour. Cycling is a strange sport; anything can go wrong along the way and you can arrive in the best form but you cannot control what happens on a daily basis.”

She had just one mishap at the Giro, Moolman-Pasio recalled, and that was when she was involved in an “unavoidable” crash during stage two.

“I got caught up in a crash near the end when the peloton was going crazily towards the finish in a fast bunch sprint and there was a touch of wheels.

“I couldn’t avoid it and fortunately I did not come down super hard. At that moment I thought ‘here goes my Giro’. With less than 10km to go, I knew making it back to the peloton was not going to be an easy task.

“I managed to make it back and not lose too much time. Once again, I had to give thanks to my team.”

After this year’s success she still aspires to reach the top tier of the podium. “Of course I still want to win the race; it’s still something I definitely want to achieve in my career,” she said.

“But I’m really proud of my achievement of finishing on the podium after 10 days of gruelling racing, which included crazy bunch sprints, a team time-trial and going up Monte Zoncolan, literally the toughest climb in Europe.

“This was not a goal I was able to achieve overnight. It was a goal I set back in 2010 when I first started racing.”