Phillimon Sebona said he felt proud after finishing eighth in his maiden cross-country race at the SA MTB XCO Championships in Bloemfontein at the weekend.

“I tested my limits in my first XCO race and finishing in the top 10 was more than I could ever have asked for,” said the PYGA Euro Steel rider.

He had been full of trepidation going into the race as he was used to seeing the courses on television and they looked “hectic”. 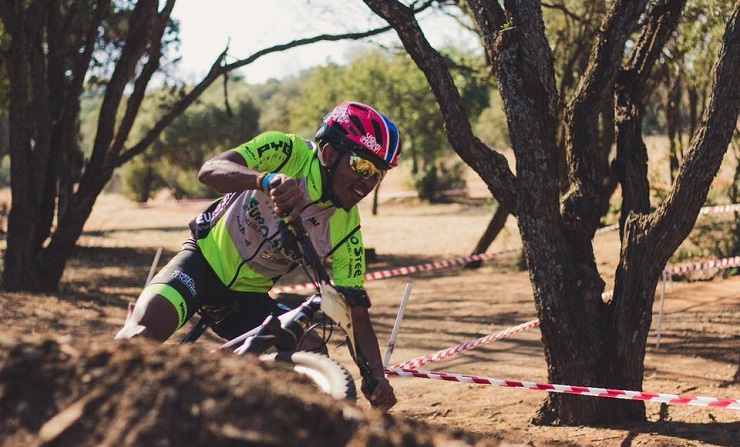 “I’ve never done anything like this [before], but I managed to try and stay calm. The people who introduced me to mountain-biking said to me to take my time, keep calm, not go too quickly and just relax.

“I did so, but it was very hard due to the obstacles and type of speed the guys ride,” said Sebona, whose career started in school when he sold peanuts to raise funds to buy his own bicycle after getting tired of asking for lifts in his home village of Botshabelo.

He added his objective for the race was to assess his abilities and strengths and how we could apply these in the future.

“The challenges started right from the start, lining up against Alan Hatherly, Philip Buys, Arno du Toit and Matt Beers.

“Having to face them in a short course like that was very intense. It wasn’t easy due to the skill level they had and pace they can set for that certain time.”

Sebona, who has only been cycling at professional level for a year, said it showed him which development skills he had to work on.

“Fortunately my team and coach Mike Posthumus are behind me and work hard to make me a better cyclist. I’m a full-time bicycle salesman and being able to find time to practise on the course was very challenging.”

He said he was grateful to teammate Buys who prepared him for his maiden race. Buys took him through the course on Thursday and Sebona felt like he was going into it blindfolded.

“Some of the places I couldn’t even ride, but he took his time to try and convince me to. He was patient, which made me believe I could do it and if I had support from Philip I knew I could.”

Sebona said he did not expect such a good result due to his skills level and the pace he had to achieve. “It was a very short and intense race, but I felt proud coming eighth. I never felt I could do it like that.”

He said the race gave him confidence and introduced him to various skills that he would be able to utilise in the future.

“I also saw I could become a better rider in this country and internationally due to the speed they race at and the technique they have. Most of those things I never had. It showed me that even though I’m a slow learner I’m trainable to do such things.”

Sebona, who won the Exxaro category and finished 42nd overall alongside William Mokgopo at last year’s Cape Epic, said his dream was to win the eight-day stage race.

“It’s one of my dreams I want to work on. I also want to be, and I’m sorry to use this phrase, one of the first riders in the SA black disadvantaged community to be able to do well in the Olympics or Commonwealth Games.

“I’m really working hard to get myself into the best ranking [I can] in the world. I believe in the next six months I’ll be where I want to see myself.

“Thank you to my sponsors and people like Philip, Matthys [Beukes], Julian [Jessop] and Pieter [du Toit] who keep motivating me. I’m very impressed I could even try and do XCO. I never dreamt of doing it in my life.

“They gave me the opportunity and I saw that I could do it.”