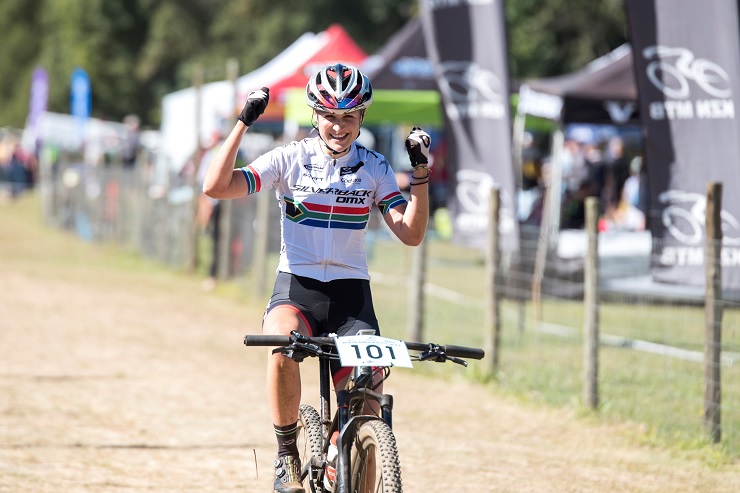 Strauss said it was always good to take a win, but that this one was particularly special.

“For the 15th time I am SA champ in my respective age category and I am super stoked to wear it [the national jersey] for another year.”

She explained that at the start they had to ease into the race as Bloemfontein was quite cold.

The women’s field then experienced a slight tumble incident but luckily no one crashed and after everyone recovered the race was on, with Candice Lill in front.

“I managed to get past everyone and back onto Candice relatively easy,” said the 27-year-old Strauss.

“I took the lead halfway through the first lap and managed to open a gap.

“It was myself and Candice heading it out with about a 10-second gap between us until the third or fourth lap.”

From there, Strauss increased her lead to about 30 seconds.

“Candice then suffered a mechanical, which allowed me to put the hammer down and bring it home.”

Strauss said she felt Lill was her biggest competition today as she made it a tough race as they fought it out to the finish.

“It makes it a little bit more worthwhile when you have some proper competition out there. You work harder for it and it makes the win so much sweeter.”

She said her goal was to defend her title and she managed to do that even though she was recovering from a stomach bug that got hold of her on Thursday evening.

She added that in cross-country racing anything could happen.

Strauss said the course suited her well and that everything came together in the end.

“I really enjoyed the course. There was a nice amount of climbing and some nice rocky descents, which made it quite technical.”

She concluded by saying she would now have a short break before she started getting ready for the MTB World Cup in La Bresse in August and the MTB World Championships in September.

“I have a couple of weeks at home. I have been away for about three weeks, so I am looking forward to sleeping in my own bed.”