Ben Melt Swanepoel said he felt relieved after crossing the line in first place at the Wildevy MTB Race in Lydenburg at the weekend.

Swanepoel, who recently won the mixed category race with Yolandi du Toit at the Great Zuurberg Trek, beat Franco Pelser and Emile Fourie to the line after 60km. 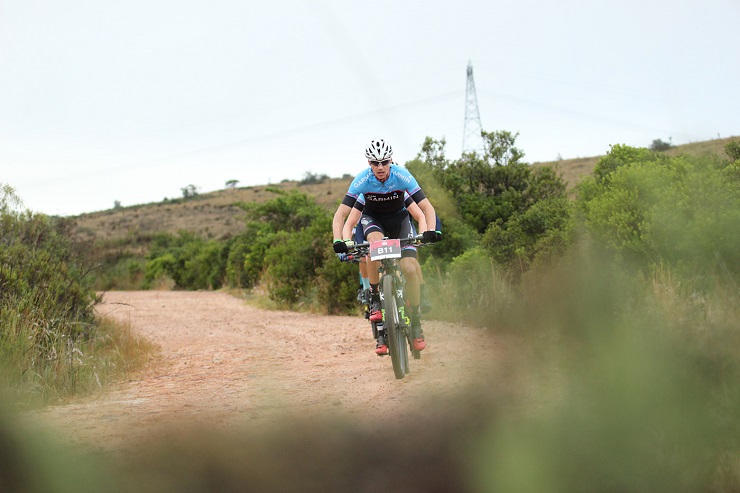 “Yolandi and I have been putting in a lot of work over the last few weeks and while she received confirmation of her fitness by finishing second at this month’s Jock Classic, the Wildevy win showed me that things are heading in the right direction [for me too],” said the Team Garmin rider.

“We were also invited to do the race and the organisers went to a lot of trouble to welcome us, so it was nice to respect them and the event by turning in a good performance.”

Swanepoel said the pace was “pretty hot” from the start, with a lot of young guns vying for position. It stretched out a few times, especially in the singletrack sections, which pushed a small group off the front.

“I forced another selection in the rocky singletrack climb and took Hein [Engelbrecht], Nohan [van Tonder], Emile and Franco with me.

“Nohan then punctured on the downhill that followed. On the following rocky climb I went hard again to gain an advantage on the others.”

Swanpoel said he did not know about it at the time, but Engelbrecht double punctured on the ensuing downhill, which put him out of the race.

“I rode a bit too conservatively, allowing Franco to get back to me and we rode together until about 5km to go when I attacked to distance him for good.”

He felt the route featured a good mix of terrain with everything from open district roads, riding through orange (clemengold) orchards, a few sandy patches, some rocky sections and lots of singletrack, well spread out.

“The gradients are mostly shallow, which meant you had to pedal all the time. I also have to mention how well the route was marked – along with hundreds of parking spaces that had been demarcated with while chalk. Every turn was also marked, along with arrows and a marshal.

“Personally I enjoyed the singletrack the most as it was often on the sides of a river or canal, under a thick canopy of trees and bush. I also saw quite a bit of game out there.”

Swanepoel, who was competing in the race for a third time, said his focus was on getting the best result he was capable of on the day.

“The only thing I really set my mind on was the harder the race was, the better it would suit me.”

What he enjoyed the most about the day was the post-race pancakes.

“The hospitality of these ‘local events’ always puts a smile on my face. The fact that it brings a community together with everyone chipping in without expecting anything in return is a fantastic consequence of these events.

“Big thumbs up to all involved. As the saying goes – it takes a village, and this ‘village’ delivered . . . in spades.”