Julian Alaphilippe demonstrated his command of climbs and descents to win stage 16 of the Tour de France which rolled out from Carcassonne and finished in Bagnères-de-Luchon today.

The Quick-Step Floors rider won his second stage in a time of 5:13:22 while retaining the polka-dot jersey. Bahrain-Merida’s Jon Izaguirre crossed the line 15 seconds later, with Mitchelton-Scott’s Adam Yates third. 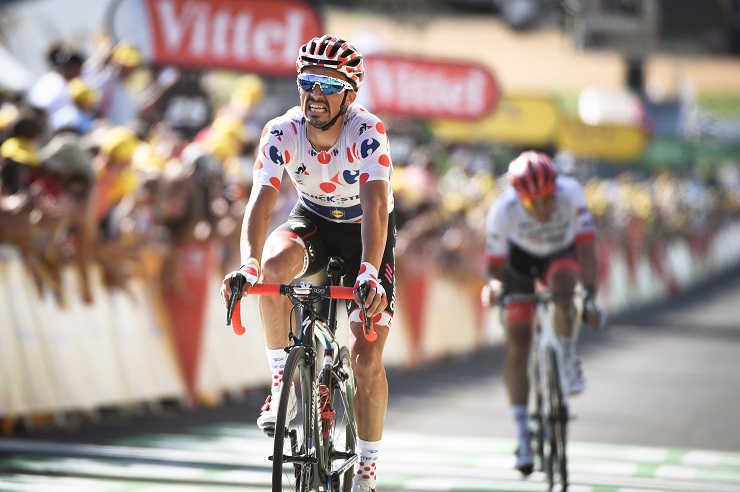 The 218km route, which followed the second rest day, saw the first definitive break after 105km. It consisted of more than 40 riders and eventually created a gap of almost six minutes to the peloton.

Quick-Step Floors’ Philippe Gilbert was one of those riders and he executed an attack as they approached the 5.4km-long Col de Portet-d’Aspet with 71km to the finish. The Belgian soon held a lead of 35 seconds.

He was one minute and five seconds ahead of the large breakaway group and 10 minutes ahead of the peloton when disaster struck. He crashed while going too fast around a left-hand corner during a steep descent and went over a roadside wall. He was lucky to escape serious injury and eventually climbed back onto his bike after visiting the medical car.

Gilbert’s setback left approximately 10 riders from the large break at the head of the race with 55km to the finish. They had a seven-minutes-and-25-seconds gap to the peloton.

Gesink and Caruso proved too strong for Barguil and were 25 seconds ahead of the 22-rider chasing group before being caught by Alaphilippe, who sprung out with less than a kilometre to the summit and extended his mountains-classification lead.

He maintained his momentum and held on to his lead as he made his way down the descent and was later joined by Bora-Hansgrohe’s Gregor Muhlberger before they formed part of a 15-man group again.

Astana’s Michael Valgren accelerated on the climb and soon had Groupama-FDJ’s Rudy Molard on his wheel with Gesink behind. The latter eventually came across with Bahrain-Merida’s Domenico Pozzovivo on his wheel.

Gesink and Pozzovivo established a gap and were joined by Trek–Segafredo’s Bauke Mollema with less than 15km remaining. They had Yates, Movistar’s Marc Soler and Izaguirre on their heels. Alaphilippe made his way across to the six riders.

Yates attacked with 12.7km to go with Gesink close behind, but the former had a healthy lead of 30 seconds with 1km to go to the top.

This was followed by an attack from Alaphilippe as Yates reached the summit 10 seconds in front of him.

Yates aggressively began his descent, which soon resulted in a crash after he lost his balance on a left-hand bend, with Alaphilippe passing him.

With less than 5km to the finish Alaphilippe rode away from Yates who had to work hard to get back up to speed.

Izaguirre caught up with the latter as they attempted to close the 25-second gap to the leader, who soon after made his way down the final descent and over the finish line.

“Today it was a very crazy day. A lot of pain in my legs, and I think for everybody,” said the stage winner.

“I cannot believe I won for the second time today. I knew the finale, especially the last climb and the downhill. I’m so happy.”

The first part of the day was interrupted by a roadside protest that brought riding to a halt after police had to intervene.

The race was neutralised after hay bales were pushed into the road. Riders and officers themselves suffered from the effects of the mace that police sprayed at the protesters, which was previously believed to be fertiliser spray. Racing resumed 15 minutes later.

NEXT ARTICLE | SA cyclist to honour late father at RideLondon