Steven van Heerden was delighted to sprint to victory in the inaugural 85km trapNET 360 cycle race in Centurion, Pretoria, today.

On what he described as a “very cold” morning, BCX’s Van Heerden said he decided to attack early on, at about the 20km mark.

“There was quite a big bunch starting and then going through a cold treed area I decided to attack and ride by myself,” Van Heerden told In the Bunch today.

“No one really reacted, so I thought I would head back to the bunch. The bunch brought me back slightly.” 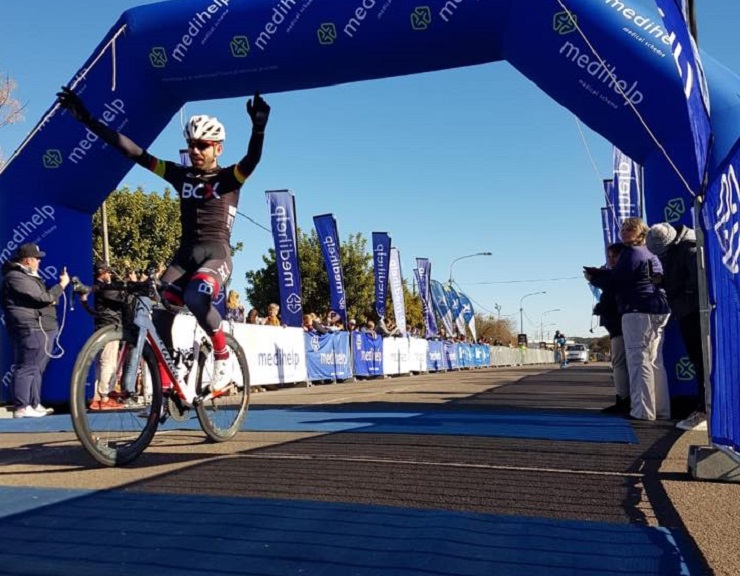 However, that was when Office Guru’s Dylan Girdlestone found an opportunity to make a move.

“About 200m before the bunch caught me, Dylan, from within the group, jumped over.

“From there on, the two of us stuck together and rode hard to stay away.”

Their plan worked out as they stayed ahead for the rest of the race before it came down to a sprint between Van Heerden and Girdlestone in the final stretch.

“We worked nicely together until there was 10km left,” Van Heerden said.

“He started attacking me up the climbs; he was a bit faster than me on the drags.

“He tried to get rid of me, but I stuck it out until the final sprint.

“It was just him and me and I managed to just beat him to the line,” he said, as his teammate Clint Hendricks won the sprint to finish third, approximately two minutes back.

Van Heerden recently returned to South Africa after spending a month racing in T-Town, the American cycling hub where he focused on track riding.

He also took part in the Jock Classic last weekend and said he was glad to be back home and to test his form on the road again.

“It was nice to be back racing in SA. You can see the guys who didn’t put in as much training through winter. Then you were also able to identify who put in the hard work.

“It was a mixed field today; there were quite a few riders, so we had a decent-sized bunch. It was a good tester.”

ProTouch did not feature, but Van Heerden said he and his team were more focused on building up towards the second half of the season.

“My form is coming along nicely. I’m busy with a big block at the moment of base-mile training to get ready for the rest of the season.

“It looks to be working out quite nicely. We are turning our next focus to the Lowveld Tour [August 9 to 12], before taking on the classics towards the end of the season.”

NEXT ARTICLE | Oberholzer surprises herself with trapNET 360 victory