South African mountain biker Yolande de Villiers has her sights set on reclaiming her mixed-race title in the seven-day Cape Pioneer Trek that starts in Mossel Bay on Sunday.

And she’s aiming to do so with a new partner.

De Villiers won alongside Neill Ungerer two years ago and placed second with Joel Stransky last year. But this year she will team up for the first time with Charles McFall. 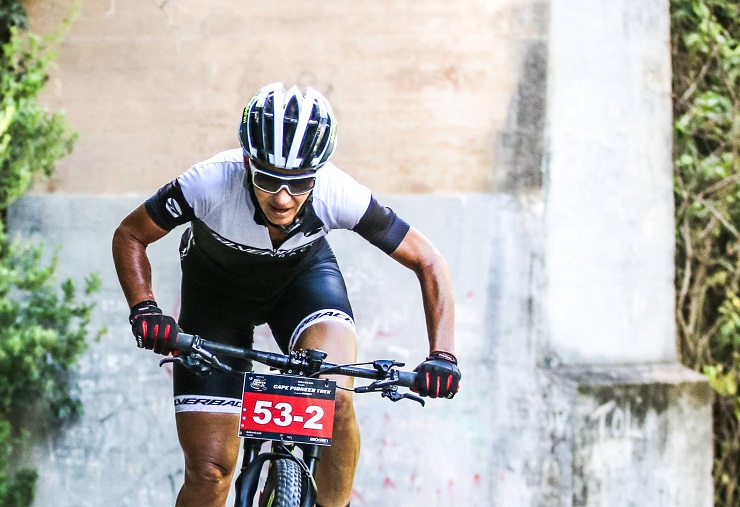 Yolande de Villiers will team up with Charles McFall as Silverback-Volvo/Mad Macs-Kawasaki in the hope of winning the blue jersey at the Cape Pioneer Trek that starts in Mossel Bay on Sunday. Photo: oakpics.com

De Villiers, 45, said her partnership with McFall was new and stemmed from their seeing each other at races.

“I know he [Charles] is physically and mentally strong, so I believe and hope he will be able to look after me well. He is also a very nice, pleasant person on and off the bike. It’s still strange waters, but I’m excited,” she said.

“Last year was an unplanned team-up and to finish second is never nice, so this time I’m properly amped and excited to go flat out for the blue jersey,” said De Villiers.

She added that her strategy would remain basically the same, which was to go as hard as possible from the start and see where they were placed in the field.

“The important thing is to keep yourself and your bike safe, not to suffer any unnecessary punctures or mechanicals and to take it day by day.”

The 10th edition kicks off with an 11.5km prologue from Milkwood Primary School and De Villiers said this added an interesting facet.

“I don’t think you can gain a lot from it. You can actually lose a lot and your eyes almost want to fall out when you see how steep the first climb is. The most climbing you do is in the first 400m.

“The stages are quite tough this year, especially on Thursday and Friday,” said De Villiers, referring to the 115km fourth stage from George and 97km queen stage around Oudtshoorn.

“It’s harder than last year, so I’m nervously excited. I think the organisers have a few surprises in store for the anniversary edition, such as new singletrack sections and challenges to overcome.”

The Oudtshoorn local said a lot of the course was on typical Karoo roads like those in her “backyard”, so she knew what to expect.

“Each day has its tough parts but also its highlights. It’s hard work, but I’m looking forward to tackling the race with soul.”

De Villiers, who placed 47th in the marathon world championships in Italy last month, added that she hoped they would experience better conditions than last year.

“It was important for me not to fall ill with the travelling and flying back from worlds, but I pray and believe that I’m in better form this time.”