Nhlanhla Thabede of the Ladysmith Cycling Academy has vowed to continue his efforts to grow the sport in rural KwaZulu-Natal after being relieved of his position as a district development officer.

KZN Cycling Development Trust chief operating officer Alec Lenferna explained that they had district officers across the province and they were all contractually bound to carry out certain objectives.

Thabede, the founder of the academy, lost his position with the trust after allegedly being found guilty at a “duly constituted disciplinary hearing of failing to fulfil his contractual duties”.

“He had to return an allocation of bicycles that belonged to KZN Cycling that were used in the coaching of children in the district as part of the programme,” Lenferna said.

He said Thabede was the appointed district officer for the uThukela District and that they had experienced various disciplinary issues with him over the last few months.

“We’ve followed the various processes and have gone through what we needed to before a final disciplinary hearing was held last Friday.” 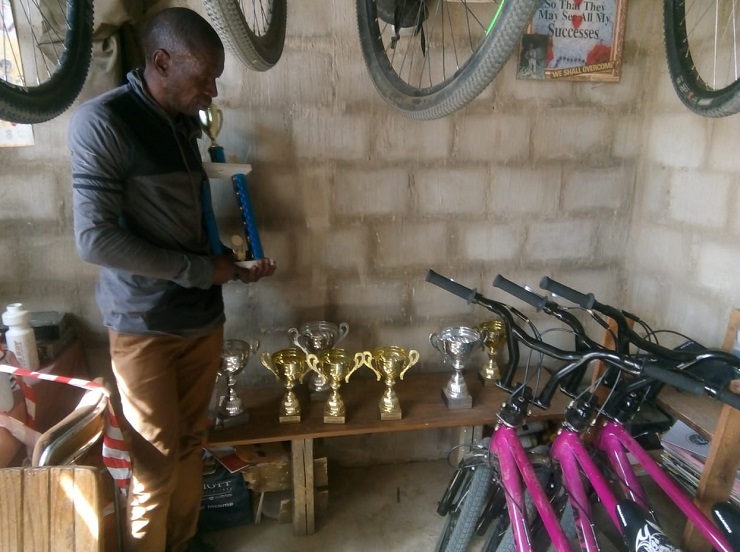 Nhlanhla Thabede of the Ladysmith Cycling Academy pictured standing with trophies and bicycles in a garage. Photo: Supplied

Lenferna said his employment contract was subsequently terminated and they then had to take back the equipment.

“Each district officer has the responsibility to carry out nine training clinics per month and we carry on off the back of that.

“That is part of our programme to introduce cycling to the kids in each district before we identify the better riders and put them in a higher performance programme.”

Thabede started his club in 2014 and it later evolved into an academy.

“Our objectives were to keep the kids busy and take them forward, but we are still fighting to reach those objectives and targets. We don’t really have a sustainable project or sponsor,” Thabede said.

He said he was the victim of “politics”, which resulted in accusations of mismanagement.

A development officer had been nominated as manager and as a result “my salary decreased”, he said. This was after he was told he didn’t carry out his duties sufficiently and ran short on holding coaching clinics, which Thabede said “wasn’t true”.

Lenferna, however, indicated that what Thabede said was “factually incorrect” and that they “have the data to back up the claims”.

Thabede remained defiant after the setback.

“I don’t have a problem with what they did because we started this before they came to us. We will continue.

“There wasn’t much progress when we were with them [KZN Cycling Development Trust] because we did the same thing every year.

“Maybe we will see some progress when we are on our own. Sometimes one door closes and another opens.

“We want to go out and ask for donations, explore what is going on and maybe someone will do something for us.”

Lenferna said the bikes that were returned were in a “shocking state”.

“It will cost us a heap of money to get those bikes in an operational state again. This was all part of the discipline issues brought forward.”

He said the equipment would be repaired so they could continue cycling development in uThukela, but “just not with Mr Thabede”.