A proud Liezel Jordaan is among four riders representing South Africa at the Africa Cup, which starts with an individual time-trial in Eritrea today.

The event comprises an ITT, team time-trial, road race and a criterium. 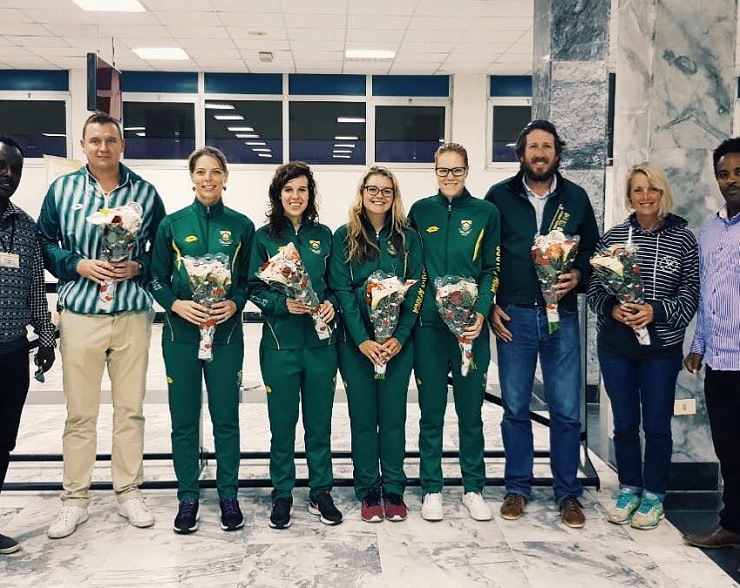 The South African team (centre) upon their arrival at the airport in Eritrea (from left) Sanet Coetzee, Zanri Rossouw, Liezel Jordaan and Maroesjka Matthee. Photo: Supplied

“I’m really grateful for this opportunity,” Jordaan told In the Bunch today.

“Putting on the SA tracksuit was just an incredible feeling and I can’t wait to represent the country in the first event today.

“My goal is just to give it my best,” she said. “It will be all of our first time representing our country so I think the feeling is mutual [to do their best].”

All the team members ride for different local teams, except for Coetzee and Rossouw who both ride for Team Clover.

Jordaan said however that they had competed against one another enough to be able to gauge each other’s capabilities.

“Yesterday was the first time we trained together to loosen up our legs.

“We have raced against or with each other a couple of times so we know more or less who has what strengths.

“I think preparation has been different for each of us, [with each] having trained with different goals in sight.”

Jordaan did a stint racing for an Australian and New Zealand-based team earlier this season before crashing and tearing her shoulder ligaments.

She subsequently had an operation and has fully recovered and added that the team was currently in a good space.

“I think everyone is on a good level, but personally I’m not going in with any real expectations as that can put unnecessary pressure on oneself.”

Jordaan was mindful of the competition they faced and cited a “really strong Egyptian girl” as their biggest threat.