Perseverance paid off for David Maree who won the scratch race in the SA National Track Championships at the Bellville Velodrome yesterday.

Some 10 laps into the 15km, 60-lap race Maree made a decisive attack which enabled him to create a half-lap gap over the bunch.

He said he then just “went flat-out”, eventually overlapping the bunch. 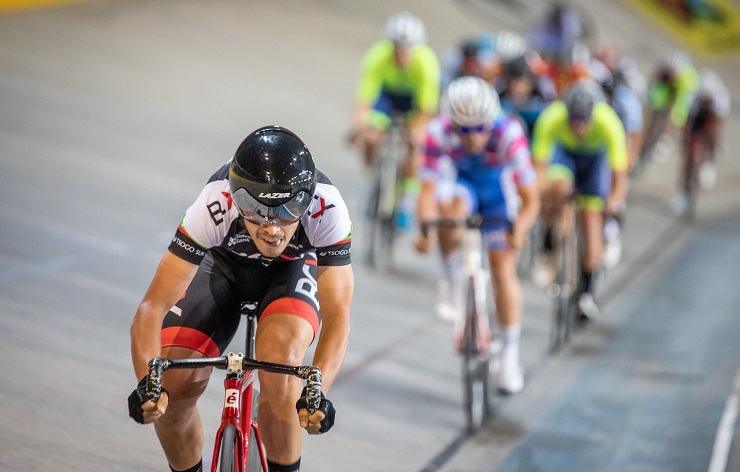 However, a challenge came when he had to stay away from a chasing quartet of Nolan Hoffman, Steven van Heerden, Jean Spies and Joshua van Wyk.

“They were on their way to lapping the bunch as well, so I had to dig really deep to bridge across to their move again,” Maree told In the Bunch today.

“It was really hard [to stay away] and about halfway in I thought to myself that this was too hard and I can’t do this.

“But it’s kind of in my nature to just suffer. There’s a reason they call me a honey badger because I just don’t die.”

Maree, however, said he surprised himself with the result. “I came to these champs really not knowing what my condition would be, especially not having done a lot of track racing in the second half of the year.

“I wasn’t sure what I was going to be able to achieve. I wanted to try to win at least one event and get a medal in as many as possible.

“To start with a win in the first event lifted a huge weight off my shoulders.”

The scratch race comprised 23 elite riders and served as a straight final, without any qualifying heats.

“I think that might have caught many guys a little off guard,” Maree said. “Many guys probably didn’t go all out, 100 per cent ready, at the first event.

“I even rode with bigger gears than I normally would; I adjusted my gears according to how flat-out we went.

“I think we averaged about 50km/h for the entire race, so it was pretty fast and hard.”

Maree said he would have “liked to do well in that” as well, having won it at previous national champs three times in a row.

“I only managed a fourth, but I had a really hard scratch race so I don’t think I was 100 per cent ready for the elimination.”

The 29-year-old will now turn his focus to the points race tonight, where he finished second last year behind Van Heerden.